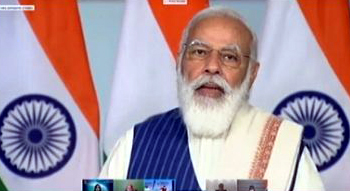 Bengaluru: Prime Minister Narendra Modi on Thursday said it is time for tech solutions that are designed in India but deployed for the world, and declared that the country is uniquely positioned to leap ahead in the information era.

He also called on the industry to make a conscious attempt to take product-level innovations to the next level.

“India as a country is uniquely positioned to leap ahead in the information era. We have the best minds  as well as the biggest market. Our local tech solutions  have the potential to go global. India is at a sweet spot. It is time for tech-solutions that are designed in India but deployed for the world,” Modi said.

Recently the government has eased the compliance burden on the IT industry in various ways.

Besides, it has always tried to engage with stakeholders in the tech industry and chart out future-proof policy frameworks for India, Modi noted.

“You all are the drivers of this industry. Can we make a conscious attempt to take our product-level innovations to the next level? A framework-level mindset has the potential to build an eco-system of multiple successful products,” he said at the inaugural of the summit attended among others by the Karnataka Chief Minister B S Yediyurappa.

Organised by the government of Karnataka along with Karnataka Innovation and Technology Society, Karnataka government’s Vision Group on Information Technology, Biotechnology & StartUp, and Software Technology Parks of India, the summit is scheduled to take place from November 19 to 21.

More than 25 nations are participating in the 23rd edition of the event along with thought leaders, industry captains, technocrats, researchers, innovators, investors, policy-makers and educators from India and different parts of the world, officials said.

Pointing out that technology is setting the pace for the defence sector to evolve, Modi said, earlier wars were determined by who had better horses and elephants, then came the era of fire-power, now technology is playing a very important role in global conflicts.

From software to drones to UAVs, technology is redefining the defence sector.

Also highlighting that with the rapid increase of tech use, data protection as well as cyber security has become very important, he said, our youth can play a big role in devising robust cyber security solutions, which can effectively “vaccinate” digital products against cyber attacks and viruses.

“Today our Fintech industry is also doing very well, millions of people are doing transactions without any hesitation,” he said, adding that this is because of people’s trust, which is very important to be preserved and made stronger.

The Prime Minister also said that the scope and need for innovation is relevant in the fields of science as well.

“Be it bio-sciences or engineering, innovation is the key to progress. India has a clear advantage when it comes to innovation because of the talent of our youth and their zeal to innovate,” he said.

Pointing out that Digital India has become a way of life, particularly for the poor, marginalised and for those in government, Modi said, thanks to Digital India, our nation has witnessed a more human-centric approach to development.

“Our government has successfully created a market for digital and tech solutions, but it has made technology a key part of all schemes. Our governance model is technology-first. Through technology, we have enhanced human dignity. Millions of farmers receive monetary support in one click,” he said.

Modi also lauded the resilience of the country’s tech sector during global lockdowns, travel restrictions, and said it used tech solutions to keep work going on, from home and from anywhere.

The tech industry recognised a great innovation opportunity in bringing people together.

“The Covid-19 pandemic was a bend in the path not the end…The amount of tech adoption that would not have happened in a decade, happened in just a few months,” he said.

The summit will have the participation of more than 200 Indian companies setting up their virtual exhibition, more than 4,000 delegates, 270 speakers, around 75 panel discussions and more than 50,000 participants every day, officials said.