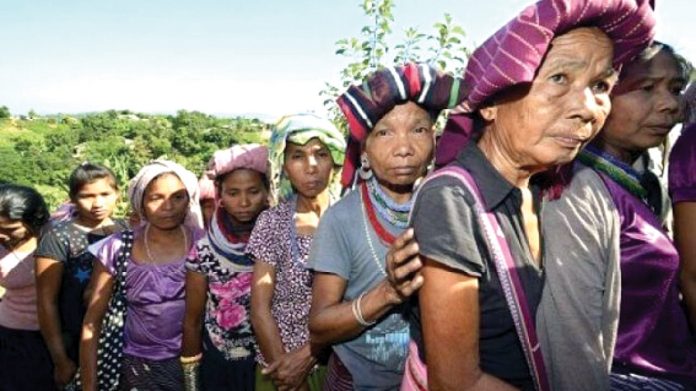 Agartala: Normal life was crippled in northern Tripura’s Kanchanpur sub-division for the 3rd day on Wednesday with tensions running high. This follows the Joint Movement Committee called shutdown for an indefinite period to protest the government’s decision to rehabilitate thousands of tribal refugees, who had fled to adjoining Mizoram 23 years ago following ethnic strife in the state.

According to police, the situation in the mixed populated sub-division further deteriorated after a few tribal refugees attacked the 36 houses of non-tribals on Tuesday evening forcing over 110 people to flee to safer places. The affected people have informed officials that four cows and several goats were taken away by the attackers.

North Tripura district Superintendent of Police Bhanupada Chakraborty said that a large contingent of security forces comprising the Central Reserve Police Force (CRPF) and Tripura State Rifles (TSR) has been deployed to deal with the situation.

“There is tension in different places in Kanchanpur but the situation is under control,” the district police chief said.

Defying prohibitory orders under Sec 144 CrPc, around 12,000 to 15,000 bandh supporters, including women and children organised protest rallies and demonstrations in front of the government offices and markets.

According to Sub-Divisional Police Officer Bikramjit Sukladas, there was no untoward incident following the indefinite shutdown which began at 6 a.m. on Monday, called by the Joint Movement Committee, comprising tribal and non-tribal leaders.

“Government offices, markets, shops and business establishments remained closed while all types of vehicles, except those of the security forces, health services and the media, remained off the roads,” Sukladas said from Kanchanpur.

JMC Convener Sushanta Bikash Barua said that they had earlier welcomed the state government’s decision to rehabilitate a small number of the tribal refugees in Kanchanpur.

He said: “Considering the area and demography of the Kanchanpur sub-division, we had urged the government, on a number of occasions, to rehabilitate not more than 500 refugee families here, but the government unilaterally initiated the process to settle 5,000 tribal families in the area.”

Barua, accompanied by the other leaders of the JMC, said that on September 22 a 12-hour strike was observed demanding that the state government alter its decision to rehabilitate the huge number of tribal refugees, but the government remained adamant on its decision.

The Nagarik Suraksha Mancha (Citizen Protection Forum) and Mizo Convention, both representing the non-tribals and Lusai (Lushai) tribals are part of the JMC.

Kanchanpur’s Sub-Divisional Magistrate Chandni Chandran told IANS that the government is yet to finalise the locations and number of refugee family members to be rehabilitated in her sub-division, adjoining Mizoram.

Chief Minister Biplab Kumar Deb said in Agartala that the process of rehabilitation of the tribal refugees was delayed due to the Covid-19 pandemic but the Centre and the state government are committed to settling these migrants in Tripura.

An agreement was signed in January this year to end the 23-year-old crisis by rehabilitating over 34,000 refugees, from 5,400 families of the Reang community, locally called “Bru”. They would be settled in different places in Tripura, including Kanchanpur, where they had migrated in 1997 from Mizoram following ethnic conflict.

The agreement was signed by the Chief Secretaries of Mizoram, Tripura and the representatives of the refugees in the presence of Union Home Minister Amit Shah.

As per the agreement, which came after the Tripura Chief Minister had in November last year agreed to accept the tribal refugees, the Reangs will settle in Tripura and will be given financial aid for their rehabilitation. They will also be included as voters in Tripura as per the agreement. The Centre has announced a package of Rs 600 crore for the settlement of these tribals, recognised as a primitive tribe in Tripura. Of the package, Rs 150 lakh will be given to the Tripura government for land acquisition, and the rest of the money will be spent upon the welfare of these tribals, who traditionally follow the unscientific “Jhum” (slash and burn) method of cultivation.