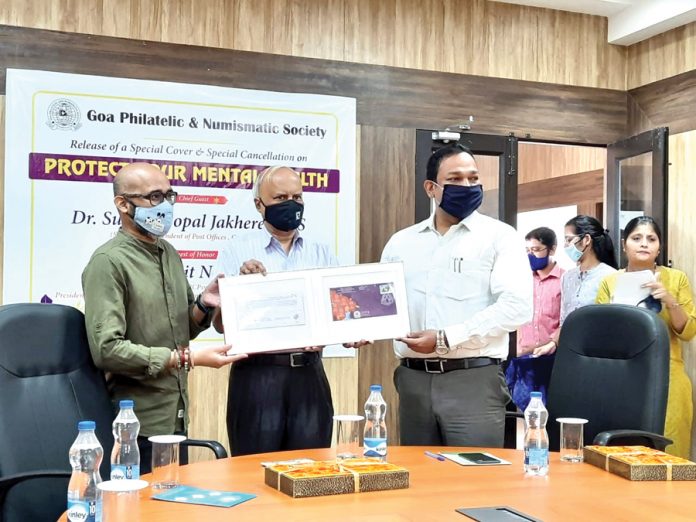 To highlight the need to fight COVID-19 and protect one’s mental health, a special cover designed by Aslesh and Siya Kamat and sponsored by the Goa Philately and Numismatics Society (GPNS) was released at a function held at Tapal Bhawan, Patto. Chief guest at the function was SSPO, Goa Region, Sudhir Jhakere.

The guest of honour was president, Psychiatric Society of Goa, Abhijith Nadkarni. In his address, Nadkarni explained the need to fight COVID-19 and protect one’s mental health. He further stressed on the need for such an outreach activity.

President of Goa Philately and Numismatics Society, MR Ramesh Kumar mentioned that it is an excellent initiative taken up by the Goa Philatelic and Numismatics and collaborating with the Department of Posts, Goa Region in educating the public in such an important activity. He further mentioned an activity that can be taken up during the pandemic is philately (the collection and study of postage stamps), a hobby that can be taken up by anyone, young or old.

He further mentioned that a special red cancellation will be available till November 21 at the main post office at Margao with green cancellation. This will be available on philatelic articles such as post cards, inland letter cards, speed post, and registered posts, etc. mental health released