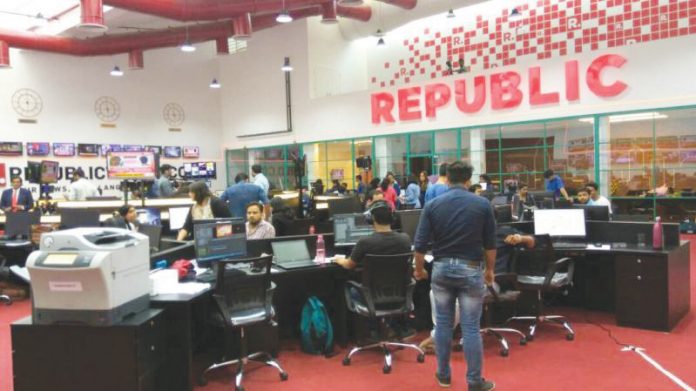 There is little doubt among many reasonably well-informed people that there is an ugly mix of the vaudeville and the vicious in the material aired by Republic TV. There is also the complaint that this is the political arm of the Bharatiya Janata Party at work, so must not qualify as journalism and be regarded as a political player trying to divide people and serve hatred through its filthy rhetoric, delivered by a frothing-at-the-mouth anchor, who is often comical in his fulminations.

But if this alone is the large part of the problem, we can leave the particular channel to its fate, irrespective of the ratings (trumped-up or not) it tries to present as proof of its viewership. The trouble is that the damage the channel is doing is much more and in many other ways. Led by an overzealous performer, who has fattened himself at the expense of society and discovered that this game pays him personally, he has lowered the discourse to a level that the very idea of decency and civility has evaporated from any conversation on this particular platform. In that, the channel led by its actor-in-chief is harmful to the long-term health of citizens and the idea of a civilised way of living. Here is a streaker who runs across the field to grab eyeballs and make money, but streakers often are and must be restrained, even when it is one odd person across the cricket field. Here is one doing the full Monty every other day and claiming the right to do this under the terms of free speech.

Further, a definite communal edge runs through the discourse. In that, the channel falls foul of the law again and again, as it did when it sought to force a communal divide in instances of the killing of two saffron-clad travellers in Maharashtra’s Palghar district or the rush at Mumbai’s Bandra Terminus as migrants sought to leave for their homes in the midst of the lockdown. Both were clearly not related to religion but were sought to be presented as such, thus sowing discord and building divides where none existed. The target often is the Maharashtra government led by the Shiv Sena, which has, of course, broken with the BJP, which then has an interest in feeding these tales and fomenting trouble.

It is no excuse to say that this is the BJP’s game, or that we must blame the party and not the broadcaster of its wishes. The players of the game and the profession they use to deliver this dirt must impose their own restraints as they work in the field of journalism. Without getting into anything complicated, there are some simple rules offered to trainees: keep a sense of balance, reasonableness and responsibility in reporting. Prosecute your point of view but keep civil. The rules need not be exacting; the least we can ask is for some broad boundaries within which the game may be played. The complete refusal to do so is a problem for the particular news channel and all that it does to please its bosses. This is a problem also because those who know will understand that there is no conviction in the positions being argued. These are opportunistic presentations that are out to milk the system, draw blood from the people of India and stash away a pile of cash in the process. The BJP will be well advised to dump this rascalism but instead it seeks to own it, which tells its own tale.

Consider how amid all this noise, the nation is being robbed of some truly precious wealth. Take the example of how Bollywood has been sought to be demonised in the wake of the suicide by the actor Sushant Singh Rajput. The words of the judge issuing notices to two channels (Republic TV and Times Now) in a case filed by some Bollywood associations and production houses mirror the anger and frustration. For example, according to reports, Justice Rajiv Shakdher of the Delhi High Court noted: “Now I am hearing that participants in TV debates are using cuss words because they get so excited. If you keep egging them on, that is what happens”.

In the case of Bollywood, the channel appears to have tasked itself with tearing apart this exciting fabric that binds India, that celebrates the power of its diversity and that adds to the nation’s unique flavour, colour and soft power. Bollywood has its ills, as does Hollywood or indeed any other industry, but Bollywood is one place where Hindus and Muslims work as one – every day, over long shifts, eating together, sweating it out late nights and celebrating together to produce the imagery, the song and the dance that has captured the hearts and minds of millions across the globe. Every once in a while, a random wanderer comes by and becomes a star. Stories are legion about struggle, grit, determination leading to stardom, as are stories of failures, who got nowhere. This is a true market at work. In its productions, it depicts temples, churches, gurudwaras and mosques all with a sense that mirrors how the average Indian looks higher for deliverance from the misery of everyday trials.

The protest statement by the Producers Guild of India is, in fact, being more than fair when it notes, as it did recently: “This is to let all aspirants to the film industry know that they should not be misled by the clickbait journalism currently being peddled to advance the sensationalised narrative that the film industry is a terrible place to aspire to work in. This is a place that ultimately rewards your talent, work ethic and ability to connect with an audience – regardless of your religion, gender, caste or economic strata. While it is undoubtedly more difficult for those on the outside to get that first chance to display their talent, with perseverance, persistence and a little bit of luck – you can and do succeed. There are too many examples to enumerate across more than a century, of outsiders to the industry who are a shining testament to this fact.” That is just the plain truth and the intangible wealth that Bollywood generates is not to be trifled with. This is being broken, torn apart by a small band that has gone rogue because they see profit in it. The whole is tarred, then specific names are tarred, then new controversies are sought to be created. How, for example, must the actress Rhea Chakraborty be compensated for all that has been said against her on these stations? Who is next in line to be thus slaughtered for the pleasure of a few and for the money making of one individual?

If we can all agree that this is wrong, then we can begin to agree that this is not journalism, that it cannot take the cover of free speech and the persons playing this must face the law and bear the consequences of their actions. The late BJP leader Pramod Mahajan, the architect of the now-defunct alliance between the Shiv Sena and the BJP, used to say that the Shiv Sena does the right things in the wrong way. In pursuing cases against Republic TV and its chief, the Shiv Sena-led government has done the right thing in the right way.    Billion Press

Latch On To Cycling

Be Choosy About Migrant Hirelings