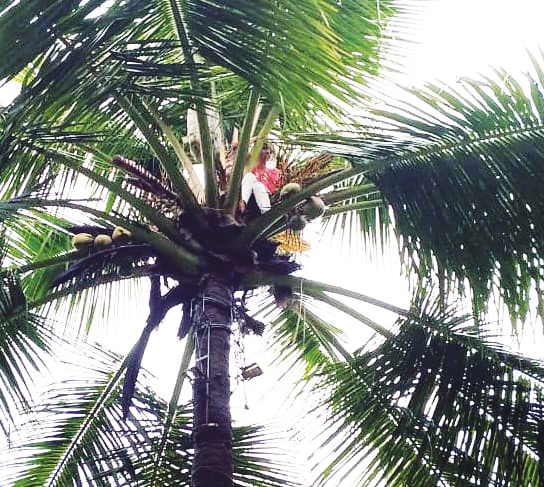 On Friday the thirteenth, we marked the Naraka Chaturdashi and ensured that the Narakasura would not see the dawn of Children’s Day and Diwali on November 14. The effigy met the same fate as Bhasmasur. Simultaneously with these events, Shweta Gaonkar from Sanguem showed the people of Goa how to make a killing with a different ‘sur’ ie toddy from coconut palm, the ‘State Tree of Goa’. Shweta makes it look like child’s play. Impossible is nothing for this sportsperson who has played cricket, handball, table tennis and tennikoit during her college days and learned to do tissue culture and climb coconut trees thereafter. There are some quick learners and one can hope to see a lot of ‘sur’ flowing in different locations across Goa before the year ends.

The coconut tree bears between six and 20 bunches of coconuts each year. This is influenced by the coconut variety, the location where it is grown, the management practices and its state of health. The  West Coast Tall or WCT varieties like Benaulim (with green, yellow or red husked nuts), Pratap, Calangute, Tiptur, Lakshadweep, etc bear less number of bunches per year than the three dwarf varieties with yellow, orange or green coloured husk and petiole, from Chowghat in Kerala.

The coconut bunch has two distinct parts: the boat-shaped spathe or poiyee and the broom-shaped spadix or xellem that bears the nuts. There are two kinds of flowers on the spadix: the miniature nuts called as buttons are the female flowers while the rice grain like male flowers are at the tips. Each unopened coconut bunch can yield 15 to 20 litres of toddy over a period of 45 days, starting about fifteen days after the start of the tapping process. Priced at `100 per quart or `120 per litre, toddy can help the youth to reach the Chief Minister’s target of `3 lakh income per year by just tapping ten short coconut trees.

The word ‘tapping’ applies in more than one sense to the process of extracting the toddy from the coconut spathe-spadix combined. The mature bunch with a distinct bulge, indicating that the spathe is getting ready to crack open and reveal the flowers on the spadix, is tied at intervals along its length to prevent its splitting open. The peduncle, or base of the spadix below the spathe, is massaged and tapped, either with a buffalo horn or with a dry spadix or mallet.

The spathe is gradually coaxed over the next ten days to move from the near vertical position to a near horizontal position, cutting about three inches of the tip on the third day. The neera, or unfermented toddy, begins dripping from the cut end like a leaking tap. The ICAR has developed an ice-cooled receptacle for the neera to enable this. Shweta and her farm colleagues use this receptacle in Goa under the supervision and guidance of Dinesh Prayag, who is a veteran in the field. The neera or kalparasa is bottled before fermentation It is also made into sugar and traditionally into pyramid shaped, dark brown jaggery without which ‘dodol’ is just not possible.