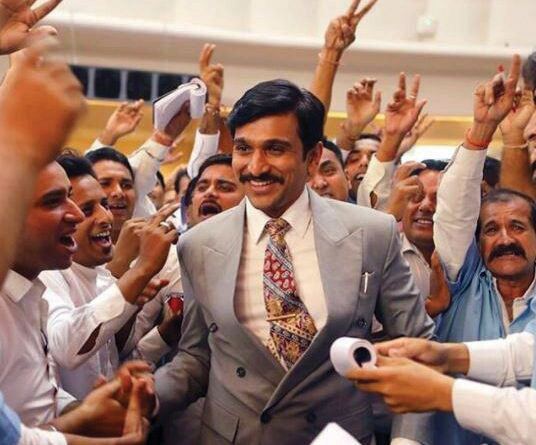 Long before Nirav Modi, Mehul Chowski and the likes duped the government and the Indian banks, there was Harshad Mehta. But unlike the contemporary businessmen who are on the run and have been tagged as ‘crooks’, Mehta was known as the “Amitabh Bachchan of the stock market” and a popular magazine even referred to him as ‘Raging Bull’. In fact, he was a hero to many people.

One of the best, if not the best series to come out from India, Scam 1992- The Harshad Mehta Story is an exceptionally well made and highly engaging rags to riches story, right from the first to the tenth and last episode. Based on the book The Scam: Who Won, who Lost, who Got Away by Sucheta Dalal and Debashis Basu, this is a thoroughly researched story and it helps that it is told from Dalal’s point of view, who was in the thick of action back then. It also helps that because there is no censorship (that might change soon, unfortunately), most people are referred to by their real names – for instance, the incident where Mehta alleged that he gave a bribe of `1 crore to the then Prime Minister, PV Narsimha Rao is referred to by his name. But a few others, like the Godman Chandraswami who had strong political connections are referred to indirectly.

The story begins with a bang – a rather perturbed employee from State Bank of India walks into the Times of India office in Mumbai desperate to speak to someone. In a lovely touch, it is R K Lakshman, India’s most beloved cartoonist who guides him to the finance editor, who in turn, puts him to Sucheta Dalal (wonderfully played by Shreya Dhanwanthary), who was a young journalist back then. The SBI employee tells her about a scam in the bank of `500 crores – eventually, the scam was valued to be 10,000 crores this was in 1992, you can work out the math as to how much it would be today.

It then cuts to the Mehtas, Harshad (Pratik Gandhi) living with his wife, brother (Hemant Kher) and parents, in a small chawl in the suburbs of Mumbai. There’s barely enough space for everyone to sleep comfortably. From there, begins his journey to a massive house with a swimming pool on the terrace, overlooking the sea.

The story engagingly captures his meteoric rise from a ‘jobber’ at the stock exchange to someone who single-handedly took the stock price of a cement company from `200 to `9000 in just three months, earning the epitaph of The Big Bull. But behind the scenes, there were a lot of murky dealings and fraud. Mehta knew how to game the system and gamed it very well. There is a fair bit of technical jargon thrown about the banking system and stock market but credit to the writers (Saurav Dey, Sumit Purohit, Vaibhav Vishal, Karan Vyas) for simplifying it to a degree where you don’t need a PhD in economics to understand what was going on. The writing in fact deserves kudos for not only making the series engrossing with the narrative but also presenting the various facets of Mehta as a person and his deeds. He is neither a hero nor a villain, nor maybe a bit of both but there is no taking sides here.

There are also some very smart references that may get overlooked. For instance, there is a scene where Sucheta and Debashish are driving in a car, a truck zips by at a junction, she applies the brakes bringing the car to a screeching halt. “Thank God, I changed the tyres,” she says. While it may look like an insignificant scene, it is a sly but clever reference to the tyre company whose shares were rigged by Mehta, in the series the company is called Polo, that deals with steel.

On the flip side, there are a couple of scenes that look out of place, like the elaborately decorated wedding of Sucheta and Debashish – it was already told what their relationship was, there was no need to show it further.

Apart from that, this is a top-notch production. The music score by Achint Thakkar (the remix versions have already started doing the rounds, which is proof of the catchy tune), the cinematography (Pratham Mehta) and the production design (Payal Ghose, Tarpan Shrivastva) deserve a special mention.

Forget big, the acting department doesn’t have too many familiar names but they all leave an impression. Apart from the supporting cast, it is Pratik Gandhi and Shreya Dhanwanthary that come out with flying colours.

Hansal Mehta is no stranger to biopics (Shahid, Aligarh, Omerta) but telling a story over five hours is different from a standard length feature film and he pulls it off with elan.

Harshad Mehta may have been the bull or wolf of Dalal Street – but no two ways about the fact that his story makes for some compelling viewing.