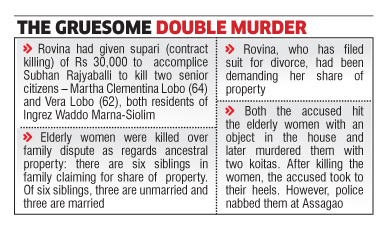 A 28-year-old woman and her accomplice were arrested on Monday for murdering two elderly aunts of her husband over property dispute at
Marna-Siolim.

Superintendent of police, crime branch, Shobhit Saxena told media persons that the double murder of the elderly spinster sisters came to light on Sunday night after Julio Lobo (38), the taxi driver husband of the accused Rovina Pereira Lobo, filed a complaint at the Anjuna police station.

The couple has two children – a seven-year-old girl and a four-year-old boy.

In a swift action, police arrested the accused, who confessed to the crime.

Rovina had given supari (contract killing) of Rs 30,000 to the accomplice Subhan Rajyaballi to kill the two senior citizens – Martha Clementina Lobo (64) and Vera Lobo (62), both residents of Ingrez Waddo
Marna-Siolim.

Giving details of the double murder, deputy superintendent of police, Mapusa, Gajanan Prabhudesai said the elderly women were killed over family dispute as regards the ancestral property: there are six siblings in the family claiming for the share of the property.  Of the six siblings, three are unmarried and three are married.

Rovina, who has filed suit for divorce, had been demanding her share of the property.

Both the accused hit the elderly women with an object in the house and later murdered them with two koitas. After killing the women, the accused took to their heels. However, police nabbed them at Assagao.

The murdered sisters were not in good terms with Rovina, and there was wrangling for a long time over the property.

All the family members were living in the same house.

Postmortem was conducted on the bodies of the deceased women at the GMC. The Mapusa JMFC remanded both the accused to seven-day police custody.

The two koitas used to commit the murders and the getaway two-wheeler were attached by police.

The double murder case was registered under Section 302 and read with Section 34 of the IPC.

Revisit nod given to JSW, Adani for handling coal: CM to GSPCB