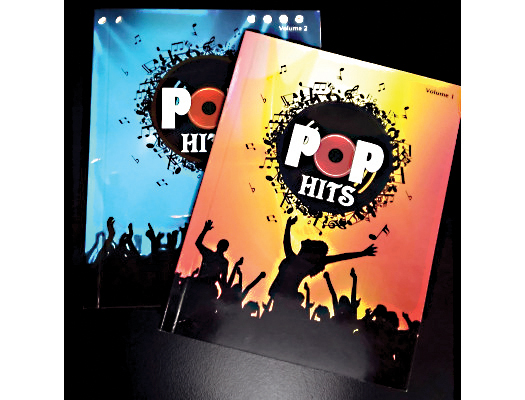 When a book comes your way, how do you read it? Do you just get down to reading its text? Do you look closely at its cover, both front and back? Some bibliophiles even touch the printed text closely, feel it, even sniff it – and use many of their senses while encountering the printed word.

But one book in my collection struck me as being an unusual one. It has no author or editor, no publisher’s name mentioned, no year of publication, nor any details about which city it was printed in and by whom. It’s simply called ‘Pop Hits’.

It comes in a couple of volumes, one of which has the lyrics of about 297 Western music songs. These lyrics are arranged by title and are the popular songs that Westernised groups sang around the 1960s and 1970s. From ‘Across the Bridge’ and ‘Adios Amigo’ to ‘You’ve Got a Friend’ and ‘Y Viva España’.  There are also sections of Waltz medleys, Calypso medleys, fast medleys, and Christmas Carols.

Quite by chance, the story of this book came one’s way, and it turned out to be quite surprising.

A priest-friend, Fermin D’Souza SJ, offered a clue – which one had almost forgotten – quite some time back. The book is believed to actually have had its birth out of a seminary in Poona (now Pune). It could have come about when local seminarians got an evening off for music, compiled the popular hits of the time, and later somehow made their files into a book.

My copy of the book was sold by Furtado’s, the music shop, for `100. It’s not clear when the book was produced or sold. The new editions online look more attractive, but if you have an older copy, it was printed in a very simple style, about 5-1/2 by 4-1/2 inches in size, and clad in a very modest plastic cover.

While mentioning this in some online group, an active networker friend in Mumbai, Linus D’Lima, from Andheri, commented: “(It was the work of) late Fr Augustine Silvera SJ I had the cyclostyled version. It was later printed by Fr George Rosario SJ – the one sold by Furtados.” Rosario is now at Byculla and Mazagaon, once strong centres of Goan migration.

Interesting! Even if it sounded almost unbelievable… All these comments are subject to correction, of course.

Eager to find out more, one cross-checked with people who might know. Xavier Centre of Historical Resarch director Anthony da Silva, SJ, a priest-colleague of the one who compiled this treasure-house of memories, confirmed what had been said.

Silva remembered the compiler as being known as “Pop” Silveira, because he joined the priesthood late in life, as against the usual practice. With his roots in Tivim, he is still remembered as a great one for making and keeping contacts, and being a “people’s man”. He didn’t forget birthdays, warmly celebrated parties, and loved to sing and to get others to sing too. He spoke good Konkani, and passed away maybe five years ago.

Fermin D’Souza SJ went back to between 1963-66, while staying at the De Nobili College of the Jesuits and attending lectures in the Papal Athenaeum. Theirs was an intense course of three years of Philosophy, then taught in Latin. Amidst a heavy schedule, in silence time and in class, the students spoke in Latin. Exams were also held in Latin then.

“But Thursday was our Villa Day. We went long distances on foot or on cycles the whole day carrying our tiffins. We came back by about 5 p.m. for a bath, an evening hour of study assimilating what was taught and also reading ahead, making summaries or meeting in our groups for study.”

Augustine Silveira was older, had a deep voice and an endearing smile. He got nicknamed ‘Pop’ in times when there was an American cartoon in the newspapers featuring ‘Pop’. Some forgot his real name but would remember him as Pop. Quite a mix of the serious aspects of religious life with something straight out of an Archie comic!

But, more seriously, the religious churches and seminaries, temples and maands were indeed the centres which nurtured Goan (and ex-pat Goan) music of another era. The same music that went on to earn laurels for people from an otherwise tiny region.

In this case, the music was written down, and cyclostyled (anyone remembers this technology of those times when photocopying and Xeroxing wasn’t even an idea?). The group behind the book in Poona was called the Glee Club – and spent its break hours in fun, mimicry and good-natured humour.

There were hymns, songs from other cultures and languages, oldies, “Negro” Spirituals, Calypso hits, Mexican, Hawaiian, and South American music. The cyclostyled copies reached all over the place and later spread more in the form of inexpensive, printed books.

This unusual story about a simple, anonymously-published book tells us so much. We learn a lesson about the music that was once popular in Goa (though there were many other forms of it, and English, though influential, was far from prevalent in pre-1961 times).

We get to know the under-studied story of Goan migration. Or the role that religion played in promoting culture (even sport), now forgotten. Someone attributed the song ‘Sorpotel’ to Fr Silveira; but you can find it online, and a quick search notes that it was penned by the Goan poet of an even earlier decade, Philip Furtado of Pilerne.

Cutting across classes and religions, music is something so important in the life of Goa, along with local culinary skills and sport. It’s surprising therefore that we overlook it so often, and for so much of the time. Pop Hits is only one reminder of this reality.