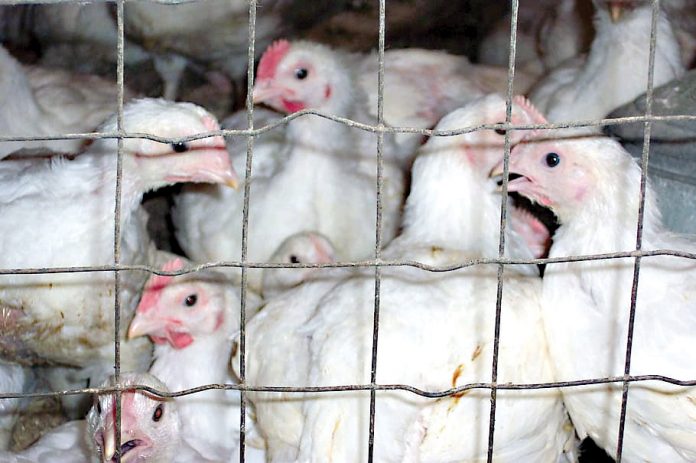 The Government of India Pollution Control Board has categorised all industries based on a Pollution Index, which calculates the effect they have on water, air, and land, and people’s health. Red, Orange, Green, and White.

Red category industries include slaughterhouses, hazardous chemical industries and firecracker factories. The Red and Orange category industries need to meet stringent minimum standards for operation and waste disposal. They get a Consent to Establish, as well as Consent to Operate, only after detailed inspections by the Pollution Control Board, and these are renewed constantly. Any guideline violation attracts heavy penalties as Environmental Compensation.

Each category below Red has less and less norms to follow, and their monitoring is easy – and in some cases almost absent. The Animal Husbandry Department has no process of inspection and hardly any inspectors. The inspectors don’t know what to look for, as they are mostly illiterate flatfeet who have never been asked to read any law, or given any forms to fill out. So, even if they go to a poultry or a dairy they have no idea of what to do. They simply take their hafta and go away. The Department’s mandate is simply to increase the number of animals, without any method to regulate the damage they do. A poultry or a dairy doesn’t need any consent to set up wherever they want. The dairy simply came under the Municipal Corporation Act, which has no power to regulate pollution by fining it under Environmental Compensation.

The result has been large scale pollution of land and water by these two industries. The hens are kept in small cages one on top of the other and faeces from the top layer dips into all the layers below. These are called battery cages. The germ-filled faeces in the battery cages become poisonous, and an environmental and a health hazard for both people and the birds. In order to keep these birds alive in such filthy environs, the poultry farm owners regularly administer antibiotics. Dairies use antibiotics and hormones (the poultries alone use 70 per cent of all antibiotics in the country) illegally, as well as the water, and faeces run-off makes sure that all the lands and water around get huge doses of it.

Consequently, every human, vegetarian or non vegetarian, becomes immune to all medicine. Hormonal imbalances lead to cancer. Both industries create methane which creates a heat wave locally. Due to the filthy conditions of both, dairies and poultries, millions of flies are bred and these, and the smell of these establishments, make it difficult for anyone to live for miles around. There is no method of disposal of the dead bodies and these are simply thrown into nearby water bodies, or left in piles on common land. Basically, the Industrial Animal Rearing Sector got away with running unregulated filthy concentration camps, gravely compromising the health and safety of the animals, the workers employed there, and the people living in the neighbourhoods.

Despite every indicator that these industries are extremely harmful and should be in the category of Red or Orange, the poultry industry was classified as a Green category industry and dairy industry as Orange/Green depending on the industry size. Both Green and White categories get away with little or no regulation or monitoring. Earlier, the Central Pollution Control Board exempted poultry farms up to one lakh birds from any regulation and even the ones where more than a lakh birds were crammed, were classified as a Green industry.

Finally, Gauri Maulekhi of People for Animals and advocate NG Jayasimha challenged this categorisation in The National Green Tribunal. The petitioners contended that poultry farms and dairy farms, actually have huge hidden costs in terms of environmental damage and public health impact. Unfortunately, there was no law in India till now to regulate these industrial establishments, which get away by misleadingly calling themselves “farms”.

In September 2020, the NGT ruled that all dairies have to be made into Orange immediately, and poultries can no longer be under the Green category. In January the NGT will decide whether the poultry industry has to be Orange or Red.

What does this mean?

It is now mandatory for all dairy and poultry establishments to obtain a Consent to Establish, and Consent to Operate, from the State Pollution Control Boards under The Environment Protection Act, 1986, Water (Prevention and Control of Pollution) Act, 1974 and The Air (Prevention & Control of Pollution) Act, 1981. Any place where more than 5,000 poultry birds or any number of cattle are kept for the industrial production of eggs, meat or milk, will have to follow minimum standards prescribed by the Central Pollution Control Board.

The Tribunal took into account research conducted by the National Environmental Engineering Research Institute which said: “Poultry production is associated with a variety of environmental pollutants, including oxygen-demanding substances, ammonia, solids and, besides, the poultry attracts flies, rodents, dogs and other pests that create local nuisances and carry diseases. Poor management of manure, litter and waste water etc. adversely affects the living in the vicinity. Odour is generated from fresh and decomposed waste products such as manures, carcasses, feathers and bedding litter. Furthermore, intensive poultry production may be responsible for greenhouse gasses, acidification and eutrophication.”

Hundreds of complaints poured in from residents, who stay in the vicinity of such farms, when the matter was being heard in court. Dairy farms are the single biggest reason for areas in Delhi to get flooded during the lightest of rains. The storm drains are clogged by the illegal dung disposal from 10 huge dairy colonies where buffaloes are housed in basements, first, second and third floors. These animals are treated like milk machines and tied with a two foot chain for their entire lives. Due to lack of sunlight and exercise, they develop fungal infections and their hides turn pink. They only get to walk a few steps – on the day they are taken for slaughter.

It is the duty of every Indian to contribute to both, preserving the environment and preventing animal abuse. If there is a dairy or a poultry farm in your neighbourhood, please enquire if they have obtained Consent to Establish and Consent to Operate from the State Pollution Control Board. If not, write to the Regional Officer State Pollution Control Board and ensure that such establishments meet the minimum standards for solid and liquid waste disposal, bio waste disposal, density of animals, and hygiene requirement. The relief to the animals that suffer in these concentration camps will be your gift to them.