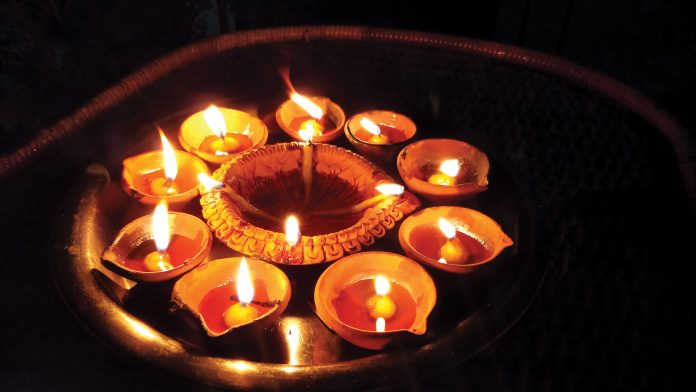 Moonless Diwali marks the beginning of the long dark, cold winter nights and the festival worships illumination and radiance.

Candles made up of bees or paraffin wax, a hydrocarbon, were invented much later. The prehistoric humans discovered the use of fire a million years ago. But to produce light till 19th century various types of animal fats and oils were used. Hindus are forbidden to use animal fats or oils and could use only sesame oil. Now with the huge choice of decorative electrical illumination and LED lamps people have forgotten the very purpose of Diwali as a civilisational tribute to illumination and the role light plays in human lives and the society.

The history of lamps and lighting differs from region to region and state to state. Some of the lighting customs have survived. In front of the famous 1500 years old rock-cut caves of Aravalem, we find stone lamps carved out at the entrance. The first lamps in Goa were made from stones. These were later replaced by terracotta lamps. In front of large temples in Goa one finds towers of lamps or ‘deepastambhas’ with slots for hundreds of oil-fired lamps. This was an ancient system of providing illumination around the temples after the monsoon.

But with no electric flashlights or torches how did people manage their activities? They made outdoor lighting possible with bunch of dry coconut leaves called ‘chudti’ which could last for a few minutes. For longer lighting or during short journeys even in strong wind they carried ‘kavtho’, ‘tembho’ or ‘mashal’, ‘hillal’, ‘divati’, made from inflammable materials dipped in oil. They carried cans of oil during travel. The flame holder was some inert material like metal.

Kerosene fired lamps were not available till the early 19th century. Candles reached Goa in the 16th century. So oil based lamps and candles illuminated the houses till 19th century. One intriguing aspect is how during days without the matchsticks or lighters, Goans could keep the fire burning. A lot of camphor was imported for this purpose as it’s highly inflammable. One major centre of import of camphor from Borneo and fireworks from China was the ancient capital of Goa, Govapuri, the modern Goa Velha- Pilar region. Terracotta and metal lamps for domestic purposes were fabricated on a large scale. The local oil extractors provided sufficient oil for these lamps.

Candles were originally used by the Romans and Goans didn’t know about these new forms of lighting till the arrival of the Portuguese. February 2 is observed as day of candlemakers in Goa because it is feast day of Our Lady Of Candelaria. We can imagine the great relief Goans had after the Portuguese missionaries introduced the art of producing candles. Wax candles were used in the 17th century not only by the Christians of Goa in their Churches but also by the Hindus in their temples as clearly stated by Dutch traveller Pietro Della Valle ( A D 1623-24 ) in his description of Hindu temples. Wax candles in Hindu temples were observed by Della Valle in AD 1623. John Fryer travelled in India from AD 1672-1681 and in his description of Goa mentions “Wax for tapers “and” massive silver-candle slides” used in Churches at Goa. The vernacular Konkani word for candle -‘menvat’ and the Marathi ‘menbatti’ is derived from the Persian ‘mom’ for the bees-wax, the raw material to make the wax candles. Similarly ‘kandil’ the Marathi word for a portable lantern which originally carried a lighted candle at centre is derived from the word ‘candle’.

Lamps with glasses were introduced after the Europeans landed in India. Chinese paper lanterns were imported by the Portuguese from Macau and became very popular in Goa. Hundreds of different types of lamps and lanterns were employed by people for domestic and religious purposes. Hindu women celebrate the devotional festival of Divzas this month by carrying specially fabricated terracotta lamps to the temples in a procession. This is a tribute to the importance of the light in life.

Bicholim is famous all over the world for metal craft and brass work. The exquisitely crafted composite lamps – traditional Goan ‘divali’ or ‘samai’ with provision for many cotton wicks derives its beautiful branched shape from the appearance of the local silk cotton tree with dichotomous branches.

The original name of the estuarine island of Divar was Deepavati because before the arrival of the Portuguese one could see the temples on the islands illuminated with towers of oil lamps. From stone lamps to terracotta, metal, brass lamps and then kerosene lanterns and petromaxes Goa could experience electric illumination for the first time in Panaji after the establishment of the power house with an electricity generator hundred years ago.

Illumination of public streets was a late development. In my village Santa Cruz we used lanterns and candles till 1966 to study. Diwali nights were dark and beautiful. After full electrification, lighting and illumination was totally transformed in Goa. Sodium vapour lamps, LED streetlights completely changed the nightscapes. Who remembers the journey of Goans for thousands of years in search of lighting now when 21st century Diwali offers a mind boggling choice of lamps and lighting?