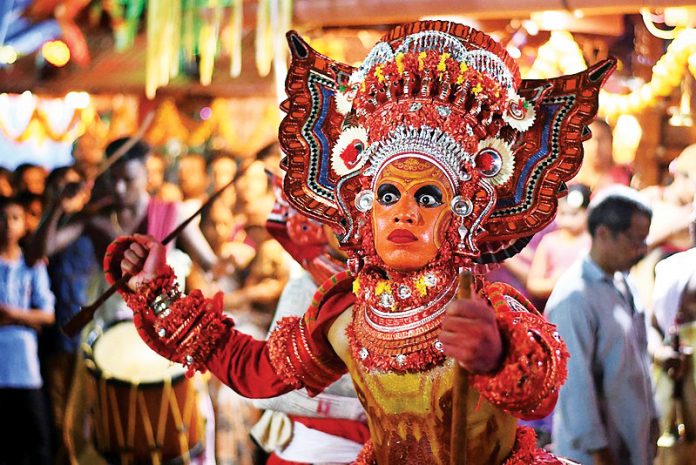 He is the God incarnate. Wearing coconut-frond skirt and towering headgear, he used to give “darshan” to his devotees at temple grounds and countryside sacred groves at midnight. Even his mere touch or soothing words were believed to have the divine power to cure diseases and bring fortunes in life.

But the outbreak of the COVID-19 pandemic has suddenly turned things upside down and changed Suresh Babu, the God incarnate, into a mere mortal, who is worried about job loss and financial constraints and pushed him into mental depression.

This is not just the story of Babu alone, but of a large number of Theyyam performers, the ritual dancers of Malabar (north Kerala), who are considered as God incarnates. Theyyam is a centuries-old ritualistic performance, a melange of folk dance, drama, music and mime, held at temples and ‘kavus’ (sacred groves) attached to ancestral village homes in the Malabar region of the southern state during November mid-May every year. It is performed as an offering to appease Gods or ancestors. While performing, the artist is considered and revered as the incarnate of God and believed to have
divine powers.

For the first time in its known history, Malabar is passing through a time without Theyyam performance as the state government has imposed strict restrictions for the presentation of the ancient ritual art in the wake of the spread of the COVID-19 pandemic. Considering this, temple managements and the performers have decided to do away with the Theyyam season this time.

As the pandemic spread and temple authorities decided to abandon the performance, hundreds of Theyyam performers lost their only source of income, many were pushed to depression and several others are thinking of going back to their traditional community jobs like mattress making, farming,
and so on.

For Suresh Babu, a well-known Theyyam performer hailing from Neeleswaram in northern-most Kasaragod district, life has suddenly come to a standstill after the COVID-19 spread. “It is something beyond my imagination. Even in my worst dreams I have not thought that there won’t be any Theyyam this season. There was no such period in my life so far,” a disheartened Babu told PTI.

Popularly known as Suresh Babu Anjoottan among his fellow performers, the 58-year-old artist said he belongs to a family having traditional right to perform the ritual dance and persons like him were born to perform it. “I do not know anything else other than performing the ritual dance, which I have been doing since the age of 13. A majority of Theyyam performers, including me, have no other job or source of income. Me and my family entirely depend on the six-months-long Theyyam season. Its cancellation means our life is in deep crisis,” the seasoned artist said. Though he didn’t specifically say how much he earns through each Theyyam performance, Babu said contributions from devotees and respective temple managements comprise their income. A Theyyam performer and his family not only have to manage to live with the meagre amount, but also have to keep some balance for the lean period during the rest of the year.

According to the government directive, a COVID-19 certificate is mandatory for the artist to perform Theyyam and prior permission from respective local bodies is inevitable. Adhering to COVID-19 protocol, a maximum of 20 persons can participate while the ritual dance is staged in Kasaragod district, which the performers and temple management feel is not practical.

Unnikrishnan, a Kannur based Theyyam performer said as there was no steady income or any welfare scheme to protect their lives, many youngsters were already not keen on taking the ritual dance as their profession. “After the outbreak of the pandemic, many of our fellow performers are even thinking of going back to our traditional jobs. We don’t find any other way to survive,” he told PTI.

Theyyam or Theyyattam means ‘’dance of the Gods’’ in local parlance. Over 400 varieties of Theyyam, representing major and minor Gods in Hindu mythology, are in practice in the Malabar region, which mainly comprise Kannur and Kasaragod districts. Elaborate make-up, colourful costumes comprising red cloth-covered waist skirts made of bamboo splices or coconut fronds and heavy-weight headgear, some of them towering even up to 60 feet height, make the ritual dance a spectacle
for onlookers.

Each Theyyam is the outcome of sincere dedication and days-long hard work of several people, especially the performer. He has to adhere to a strict vegetarian diet and celibate lifestyle and abandon all worldly pleasures even days before the performance. As many major theyyams can last more than 12 hours, the performer may not be able to have food or water on proper time. During the seasons, many artists work continuously for weeks, taxing their bodies. Even the elaborate body and eye make-up may take up to five-six hours to complete. The performers body is richly painted with natural dye and other colours and the pattern and design vary according to the deity which he represents. Many artists start suffering from various diseases from hypertension to arthritis. The heavy make-up causes irritation to the skin and problems to eyes. The fire-jumping in which the performer leaps on a heap of hot ashes at frequent intervals also causes serious health hazards.

Velan, Malayan, Vannnan, Anjoottan and so on are among the major communities who traditionally perform Theyyam. The performer, wearing a multi-layered waist skirt, towering headgear, traditional ornaments and heavy face and body makeup, enters the temple premises and invokes the deity by dancing to the frenzied rhythm of drum beat. It is believed that God possesses the artists body while performing and gives blessings to the devotees assembled there to see him. As a token of blessing, the Theyyam performer distributes rice with turmeric powder to the devotees.

People approach Theyyams with their endless woes and seek blessings from them for bringing prosperity in life. Suresh Babu remembered how several couples, who were blessed with new-borns, came to offer him precious gifts while performing. “They believe in the divine powers of Theyyam. Even people bring unsettled legal disputes in front of Theyyams and seek solutions. But now, my days have passed without any meaning. I am doing nothing…I am heading to depression,” he said.

A sad Babu also said he was spending time now-a-days cherishing those good-old memories and feels that the days without Theyyam are equal to death. The Theyyam artists of Malabar also requested the authorities to come out with a financial package to save their lives as the unexpected pandemic and lockdown has robbed them of their sole source of income and pushed
them to penury.