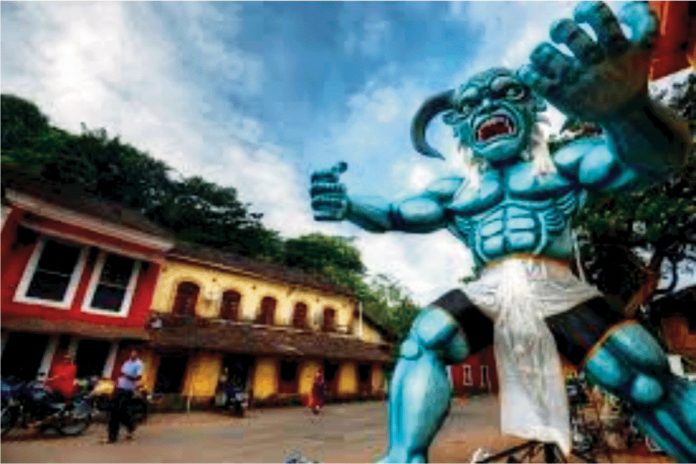 In an era of an unprecedented pandemic, when the world is enveloped in a dark shadow of deaths, sorrow and gloom, our beautiful Goa, along with the rest of the world, is set to usher in a festival related to light, brightness, and happiness. Diwali is a looked forward festival, across the entire plethora of social communities,whichbrings out the best among most!

It is that time when many warm-hearted individuals and corporate, attempt to stretch out their hands to those in the shadow of darkness of poverty, or under a cloud of gloom, with an objective to wipe away the sadness and imprint a smile of joy on their faces. While the world has a very exuberant manner of celebrations, depending on the region of their settlement, it is observed that many citizens of other nationalities are joining in this festival, to take forth the common objective – spreading
happiness!

In India and so also in the entire Konkan region including Goa, the drums start rolling for ushering in this festival by commencement of the nine night and ten days festival called Navratri (Nav – nine; Ratri – nights), a vibrant post-monsoon celebration in honour of the ferocious looking Goddess Durga. These nine nights end with the celebration of Vijayadashmi or Dussera on the tenth day. These nine nights are vibrantly celebrated by installing the ‘garbha’ and celebrating with the colourful dance called Dandiya. In Goa, the Navratri’s attract a huge crowd in temples for the Makar festivities, where the presiding deity is seated in a swing like wooden, frame-like structure, decked with colourful decorations and flowers and jewelry. This is then swung, rhythmically, to the beats of percussions, display of the aarti in a particular way, and hymns.

During ‘Navratri’, Goddess Parvati, the consort of Lord Shiv, is celebrated in nine different incarnations, along with a general belief of relating to certain colours for each of these days. These nine days celebrate: Day 1 – Shailapurti(Daughter of the Mountains),colour- grey; Day 2 -Brahmacharini (the unmarried self in the form of Sati), colour- orange; Day 3-Chandraghanta (to venerate the day Parvati wore the Ardhachandra (crescent moon) on marrying Lord Shiv), colour-white; Day 4 -Kushmanda ( creative power of the universe or propagation of plant life), colour – red; Day 5 -Skandamata (Protective form of mother of Kartikeya, her son), colour – royal blue of peacock feather), Day 6 – Katyayani (born to Sage Katyayana and is supposedly the most violent form of Goddess Durga), colour-yellow; Day 7 -Kalaratri (Most ferocious form of Goddess Durga where she removes her fair skin to kill demons SumbhaandNisumbha) ,colour- green; Day 8 -Mahagauri (symbolises optimism, peace and tranquility), colour – peacock green; Day 9 – Siddhidatri (conferrer of ‘Siddhis’ and also a form of Sri Laxmi, Goddess of Wealth), colour – purple.

On the tenth day after Navratri,Dussera is celebrated symbolising the win of ‘good’ over ‘evil’. On this day, it is said in Ramayan, the Lord Ram, in an attempt to set free his wife Sita, kidnapped by the ten-headed Ravan, defeated and killed him. In Mahabharat, it is believed that the Pandav brother Arjun decisively won the battle against his own arrogant cousins, the Kauravas, at Kurukshetra, after defeating warriors of high repute and expertise. These events portray a sense of a ‘win of good over evil’. During the dynasty eras, Dussera was traditionally the day when kings crossed their kingdom borders (Simollanghan) with their armies, to conquer new lands to append to their kingdom and expand them. One of the most significant aspect of Dussera greeting, is the exchange of the ‘apto’leaves (Botanical name: Bauhinia racemosa), signifying exchange of gold.

Exactly after 21 days after the nine nights celebration and Dussera, arrives the festival of Diwali. Diwali is also surmised as the day that the victorious Lord Ram returned to his hometown Ayodhya along with his brother Laxman and Ram’s wife Sita, whom he released from the clutches of Ravan. The mythological reasoning is that it took 21 days for Lord Rama to reach Ayodhya from Lanka.

In Goa, Diwali is a celebration of a happy homecoming, festive family gatherings and exchanging gifts; while the youngsters in the community are busy creating the effigy of the demon Narkasur. Narkasur is surmised to have kidnapped 16,000 maidens from heaven, and had created havoc in heaven and Earth. He was confronted and killed by Lord Krishna. (Read Navhind Times dated October 19, 2019). Diwali is celebrated on the first day of the Hindu Lunar calendar month of Kartik, a day after Amavasya (New Moon) or the last day of the Hindu month of Ashwin. However, most of the families carry out the simple rituals that follow, possibly without understanding or realising the relative importance of these rituals.

Why do they burn the effigy of Narkasur in the early morning? What is its significance? The demon Narkasur was said to have lived in filthy surroundings and had plunged the Earth in total darkness. After his inhumane acts and kidnappings, Lord Vishnu in his reincarnation as Lord Krishna challenged Narkasur, with his armies and killed him, after a horrific battle. In this battle, the army of Narkasur was annihilated and many of Krishna’s soldiers were badly hurt. To portray the end of this battle and slaying of the demon, which possibly ended by around 2a.m., the effigy of Narkasur is lit and burnt. After he was killed, light percolated and illuminated the Earth and people rejoiced by lighting the ‘akashdeep’ or ‘sky-lamp’. Hence, the ‘akashdeep’ or ‘akashdivo’ has to be lit at about 2a.m., and not the night before Diwali. Many homes, light mud ‘pantiis’ with cotton wicks all around their house.

Another aspect of this battle, surmised and portrayed through one of the rituals, is the bath usually had before sunrise. This bath must include the application of coconut oil followed by turmeric powder paste and at the end of the bath, the application of the ‘uthnne’. This is the possible portrayal of the soldiers, and people who participated in the battle with the forces of Narkasur, returning home hurt and injured, in the early hours. When the injured and tired soldiers returned back, they applied ‘oil’, preferably pure coconut oil on their bodies, to relieve themselves of the pained muscles. Even to date, it is a good medication for injured muscles to be massaged with coconut oil, for fast relief.

During the battle, the skin gets bruises and suffers deep cuts, needing attention. This was taken care of by applying ‘haldi’ (turmeric) powder paste. Turmeric is a time tested antiseptic, used in local households. In the present day ritualistic bath, this haldi powder is mixed with thick juice, squeezed from grated coconut kernel. Application of this mixture on your skin cleanses the same from germs and dirt, while recreating the use of the same during olden times. After the bath, and just before the final showers, the pleasant aromatic herbal powder of ‘uthnne’ is rubbed into the skin, to possibly remove the nauseating smell of the blood, sweat and muck that was covering the body of these soldiers, after the battle.

After the soldiers were clean and bathed, the next ritual that followed was their welcome in the home, after a safe return, by their wife and the women of the house. Sweets, especially beaten rice or ‘fov’ or ‘poha’ dishes of sweet and spicy taste, with dates and dry fruits,are made and shared with neighbours to celebrate the safe return of their men-folk and victory of good over evil. Today too, the Diwali aarti is a major part of the ceremony, before the family sits to eat the array of sweets. However, the symbolic destruction of the evil is carried out, ritualistically, by breaking a bitter tasting ‘karit’ or ‘mouse melon’(Botanical name – Cucumis trigonus) with the toe and applying a bit of its juice to the tongue.Karit fruit is a very good anti-diabetic remedy and the seeds are anthelmintic. Possibly the breaking of a karit was to stamp out the evil, under your feet and draw blood of the enemy!

Whatever be the mythological reasoning, Diwali is a time to celebrate with illumination and lights. It is time for the spirit of joy to be shared and spread; it is time to keep aside aggression and generate passion. Happy Diwali to all my readers! May the goodness and light of Diwali illuminate every Goan home
and last forever!