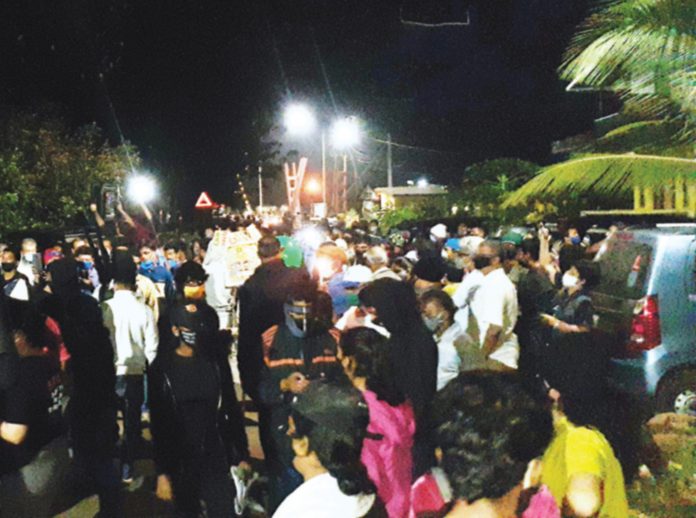 People opposing the double-tracking project on Friday decided to call on Chief Minister Pramod Sawant so as to impress upon him to suspend coal transportation through
the state.

The decision came at a public meeting at Assolda in South Goa, which was held against the backdrop of a ‘Narkasur vadh’ (killing of demon King Narkasur) function.

Co-convenor of Goyant Kollso Naka Abhijeet Prabhudessai said that people of Curchorem and Assolda have been opposed to the double-tracking project, which is aimed at facilitating the expanded coal transportation
through Goa.

The project poses a threat to environment and people of the state. Hence they have been rallying against it, he said at the meeting that was   attended by people from Assolda, Curchorem and
surrounding areas.

The agitators put up a Narkasur effigy calling it as ‘Coalasur’ – the effigy had images of three corporate giants in the country.

“We will plan the future course of action for carrying forward the agitation. A ‘civil disobedience movement’ could also be launched against the project,” Prabhudessai explained.

The agitators decided to call on the Chief Minister over the imbroglio. They want to issue a deadline to the government for suspending coal transportation through the state.

Refusing to give a political colour to their agitation against the three controversial projects, he maintained that workers from all political parties are welcome to take part in the movement.

Peter Mascarenhas, a local resident, spoke out against double-tracking, recalling the genesis of the movement against the coal transportation.

“In a democracy, people are supreme. The government must do what people want and should not undertake initiatives or projects which are detrimental to the wellbeing of the people,” Mascarenhas reckoned.

There was a strong posse of police personnel at the meeting venue to keep law and order.

Man held at airport with smuggled gold worth Rs 95.03 lakh