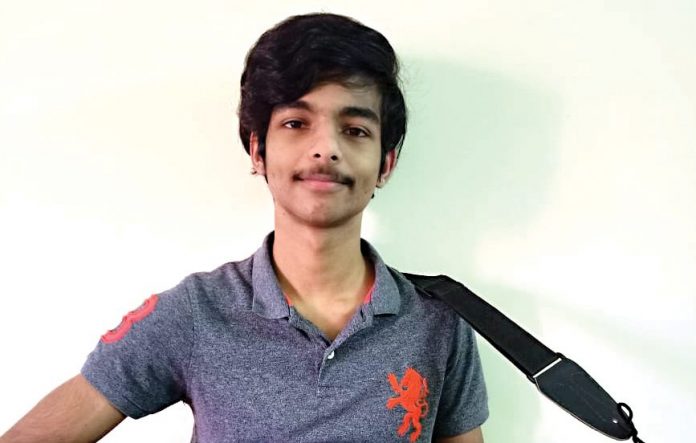 Sancoale-based teenager Daniel Thomas is all set to release his second single ‘The Sky’ on November 16. NT KURIOCITY learns about his passion for music and more

Singing had been an aspiration of Daniel Thomas for a long time, but he absolutely fell in love with music when he started learning to play the keyboard at the age of 11. He started writing songs back in 2018, but he only recently became confident of his songwriting when he released his first single ‘I Wish You Were Here’ under the artist name Dxnny T in August 2020. And the 16-year-old is now set to release his second single ‘The Sky’, this time under his full name.

“‘The Sky’ is about setting oneself free from societal burdens and not letting judgements affect you. Simply put, it’s about being who you want to be,” he says, adding that he chose the title ‘The Sky’, because the simple act of looking at the sky can give you one hope. Further, he says, the song is in the form of a conversation with the sky.

Thomas’ songs fall under the genre of pop and he likes to write about things he strongly feels about, sometimes with a personal element. “I guess the inspiration comes from being true to yourself. And I think the best part about songwriting is that it gives me a chance to express my thoughts and emotions through the best medium,” he says, adding that when he writes, it is usually influenced by how he feels and how it would make the listener feels. “Chances are you’ll always be able to relate to my music, in some way or the other,” he says.

However, when it comes to creative process, he doesn’t have a fixed plan exactly. He could randomly have an idea for a song, or a line and he immediately writes it down. “I just write the first thing that comes to my mind and later I organise it all. When I wrote my first song, I was just randomly strumming my guitar, when I suddenly got the first line of the song. I immediately penned down my thoughts and soon enough the song was complete,” he says, adding that while he doesn’t have any musical influences per se, he is a big fan of Queen and Alec Benjamin, because even though there’s a stark contrast in their music styles, it’s the honest songwriting that he loves.

And though he has a very small number of listeners right now, Thomas has been overwhelmed by the support he has got so far. “I received a lot of messages appreciating my music and that’s what keeps me going,” says the Sancoale-based teenager whose biggest take away from his first single is that he just has to keep learning. “My first single wasn’t perfect but I just keep learning every day. There’s no looking back.”

A student of Mount Litera Zee School, Chicalim, striking a balance between his music and student life of course presents challenges. However this year, due to the pandemic and with school being online, he has found more time to work on music. “Even though I would have wished for the pandemic to not have happened, if it hadn’t I probably wouldn’t have been releasing music,” he says, adding that while he has a bunch of ideas for his next songs, there is nothing concrete as yet.

( ‘The Sky’ is all set to release on November 16 on major streaming platforms like Spotify, Apple Music, JioSaavn, YouTube, etc. )

The sounds from the screen

The power of non-violence decoded