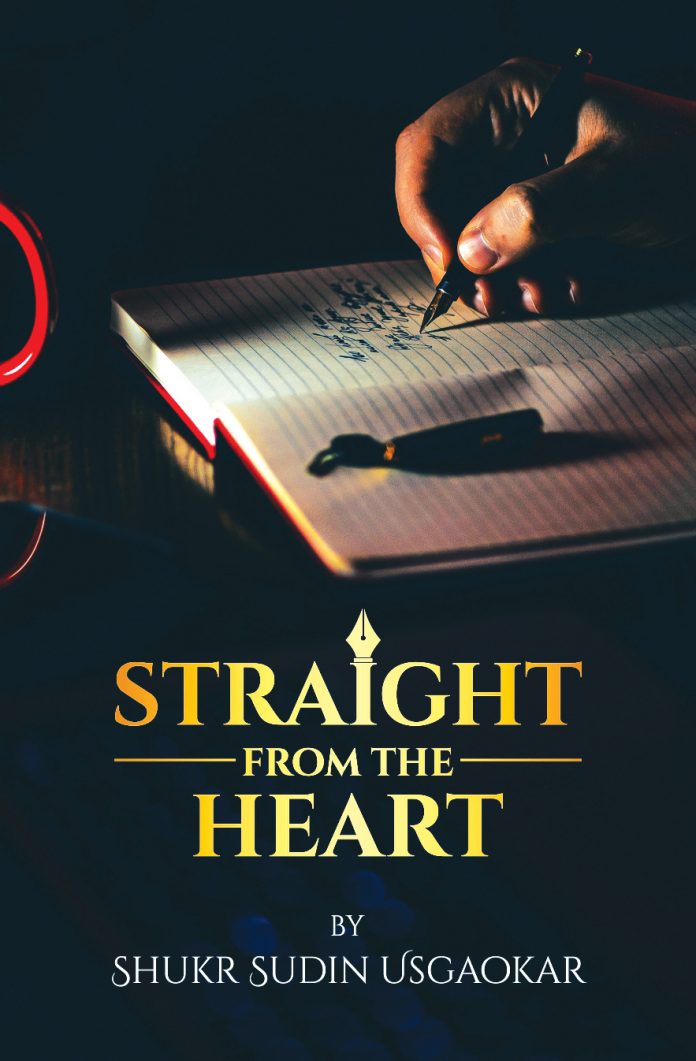 Caranzalem-based law student Shukr Sudin Usgaokar, is all set to virtually release his debut book of poetry ‘Straight From The Heart’ on November 7. He shares more with NT BUZZ

Q. Tell us more about ‘Straight From The Heart’.

‘Straight From The Heart’ is a corsage of poems variegated in both hue and fragrance, each intending to evoke a different feeling in the heart of the reader.

From the traditional themes of nature and society to the relatively nascent realms of political satire and paradox, it attempts to lyrically cover the entire gamut of experiences, perspectives and sentiments, the totality of which shapes a man’s life.

It is also a ‘straight from the heart’ tribute to all those verse-makers whose works lay forgotten in dusty book shelves or never saw the light of the day, remaining as scribblings in their diary or thoughts in the recesses of their mind. It is a feeble attempt on my part to revive a great but unfortunately dying art form.

Q. How did you get into
writing poetry?

One day, I stumbled upon a book authored by the late Atal Bihari Vajpayee. It was a collection of 21 poems penned by him, translated into English by Pawan Varma. I was spellbound by his ability to convey so much in such few words, and yet have such a tremendous impact on his reader.

Inspired by our former prime minister, I too decided to express my views on various topics and issues in verse rather than prose, whenever an interesting idea crossed my mind. Two years down the line, I realised that I had written a number of poems, sizeable enough for me to compile them into a book, and ‘Straight From The Heart’ was born.

Q. What made you confident enough to decide to publish a book? And how did you go about it?

Initially, I used to share my poems with my friends, colleagues and relatives on WhatsApp. To reach out to a larger audience, I started my own blog but was not able to get much readership.

I had been intermittently publishing some of my poems on Storymirror.com as well. It is a wonderful platform for an aspiring writer to publicise content. However, not only do they curate stories and poems submitted by the likes of me, but also publish it in book form. As someone who has always believed that there is no substitute for the feel of paper and the old-world charm associated with reading a book one can actually hold in one’s hand, and finding oneself magically transported into a different world, I couldn’t resist this opportunity. I submitted a representative sample of my work and the publishers were willing to go ahead.

Q. What is your writing process like when it comes to poetry? And how do you find inspiration for your works?

Whenever I come across an interesting theme, be it topical or abstract, I try to locate the source of that inspiration and do some basic research on it. Sometimes, though the idea has taken root, it needs to percolate further before I can jot it down in memorable words.

The protracted lockdown imposed on account of COVID-19 gave me ample time to think and write and was responsible, in no small measure, for engendering many of the poems which became part
of my book.

Q. Are you going to stick to poetry in the future? Or do you hope to venture into short stories or novel writing, etc, too?

As someone whose professional career will be in the field of law, I will consider myself lucky if I am able to spare some time to write anything at all, be it poetry, prose, novels or short stories. In the words of Justice Joseph Story of the United States Supreme Court: “The law is a jealous mistress and requires long and constant courtship. It is not to be won by trifling favours, but by lavish homage.”

However, at this point it is difficult to say with certitude what form of writing I will pursue in the future, if and when I decide to pick up the pen. I might even take to academic writing in the footsteps of my grandfather senior advocate M S Usgaonkar whose books, articles, and lecture series on the family laws of Goa and the Portuguese civil code are regularly cited as authorities in the court.

Q. Poetry today has seen resurgence at least on social media. What are your thoughts on this?

Just a few months before legendary Urdu poet and lyricist Majrooh Sultanpuri passed away, one of his fellow lyricists Javed Akthar had met him and inquired as to what he was doing. Majrooh Sahab, as he was known to all, replied in Hindi: ‘Andhon ke shahar mein aaine bech raha hoon’ (I am selling mirrors in the city of the blind). With his acerbic wit, he pithily summed up the status and sentiments of poets in the modern era, a time when mindless entertainment is available in infinite supply and attention spans are getting shorter by the day.

It is truly saddening to see that unless it is part of the syllabus, which one is forced to study in order to pass an exam, hardly anybody is eager to read any form of literature, be it prose or
poetry.

Works of some celebrity authors like Chetan Bhagat and Dan Brown sell like hot cakes but for the vast majority of budding writers, it is still extremely difficult to find an interested audience.

As far as poetry is concerned, there is a general impression that it is an esoteric art form; something understood and appreciated by very few people. But this is a complete misconception, and the fact that it is witnessing a resurgence, at least on social media, though gradually, vindicates this.

Heartening as the phenomenon may be, nevertheless, authors of all kind, including poets must not only reinvent themselves and their content according to the tastes and liking of the current generation but also aggressively market their content if they wish to survive and remain relevant.

Q. English books in Goa still struggle for an audience. How do you think this can change?

This is a universal problem. Faced with the onslaught of web series, movies and videos, the demand for all kinds of books, irrespective of language has plummeted. Academic publishing such as study guides and textbooks might be faring relatively better but with the limitless quantity and variety of information available on the internet, it is suffice to say that they too have seen better days.

No doubt, there will be some nostalgics like me for whom books are and will always be irreplaceable, but the general trend, whether it is for entertainment or educational purposes, is towards the cyber medium. Price, time, and space constraints are other factors which have militated against the sale of books and contributed to their downfall.

However, if we see the brighter side, Goa is advantageously placed as compared to other states in India. It has a high literacy rate as well as a large English speaking population. If the sale of English books is down, one can only imagine the plight of books written in other languages and the authors whose creations they are.

When it comes to the question of change, e-books can be the way forward. Not only do they cost much less as compared to their physical counterparts, but the compactness and portability of devices such as Kindle and other e-book readers means that one can experience the joy of reading anytime, anywhere.

(The book will be launched on November 7, 2 p.m. via Google Meet. The link is
https://meet.google.com/eto-acvh-txw. Thereafter, the book will be available for sale on Amazon and Storymirror.com for `150 in paperback as well as ebook formats.)