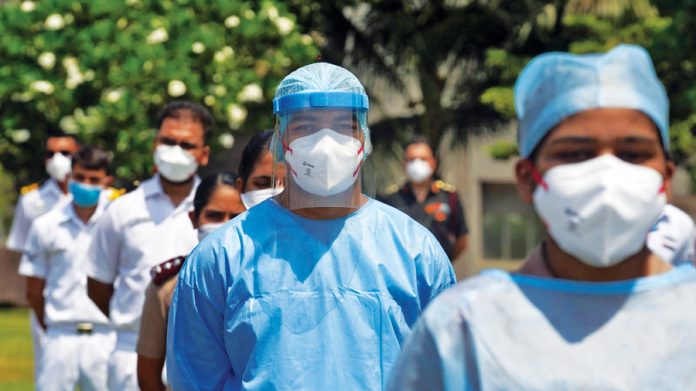 Bengaluru: The steep decline in the number of coronavirus cases and deaths in Karnataka indicate that the infections are shifting from high population density areas to other places, a noted epidemiologist said.

After clocking up to 10,000 cases daily for over a week early this month with fatalities even touching 200 on certain occasions,  the caseload has come down to about 5,000 to 6,000 in the last week.

The fatalities too have dipped  from three digits to two digits.

According to epidemiologist Giridhara R Babu, the fall in the number of cases and deaths due to coronavirus is quite evident and an encouraging trend.

Some experts, however, attribute the drop in daily cases to the high testing rates and early detection of infections.

“This reduction indicates that the coronavirus infection is shifting from high population density areas to other areas,” Babu, an epidemiologist at the Indian Institute of Science and a member of the COVID-19 technical advisory group for the Karnataka government, said.

He explained in the other areas, higher population density may not be there.

“So, therefore, it might be in alignment with what’s happening in the country. So, let us wait and watch,” he  said.

However, chief of the Karnataka COVID-19 War Room, Munish Moudgil attributed the high testing rate to the slump in the number of new infections.

In general, the cases are coming down as the infection is coming under control, Moudgil said.

He said holidays too have seen reduction in cases.

“But the general reduction trend is correct and proves the success of the Karnataka model of high testing leading to control of the disease,” he added.

According to a health official, Karnataka has started conducting tests extensively and opened sample collection centres at crowded places in urban areas.

It is a common sight to see people sporting PPE kits under a makeshift canopy in Bengaluru at crowded places such as KR Market, Kalasipalya, Majestic, Gandhi Bazaar, Kumaraswamy Layout, Banashankari, BDA complexes, near shopping malls and bus stands, he said.

“We are taking the coronavirus head on. Instead of collecting samples at the designated places with unprecedented precautions, we have opened camps at every nook and cranny in urban areas and other crowded places,” the official added.

According to him, health workers have turned into corona warriors in the true sense.