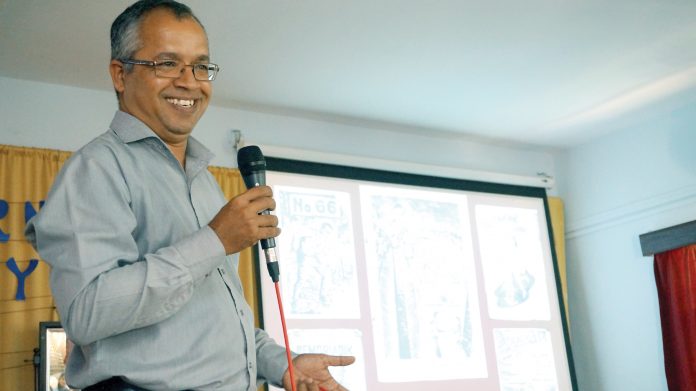 Is he an engineer trained at the Goa Engineering College, Farmagudi? Or, is he a Konkani protagonist, who can give a speech in the official dialect which is quite different from that spoken in his area? Or, is he a short story writer? An emcee, editor? All of the above?

Fifteen years or more ago, I first ran into José. I got to know him as a writer but soon understood that he was a civil engineer, trained at the GEC. Given his quiet demeanour and soft style of speaking, some still mistake him for a priest!

He was one of the participants at a course in book publishing, organised by the National Book Trust (Delhi) around 2005, and again in 2012. Holding training courses is one thing, and the NBT did a fair job in the Goa of those times; but getting people to actually publish their work is quite another task; José was one of the few who actually embarked on that task.

We got to know each other better. Along the way, the engineer in José was propelled into doing a book called The Parish Churches of Goa: A study of façade architecture. Painstakingly, José and his Loyola schoolmate (another engineer-turned-writer) Pantaleão Fernandes, went around the length and breadth of Goa.

While Pantaleão photographed, José described each church, its structure and design. This work describes itself as a “photographic record of the facades of al the 158 parish churches as they stand today, along with a brief history and other useful information”.

The book has gone through reprints since; despite the fact that it’s all-colour printing makes it a bit pricey, it remains a good read.

More recently, he announced the quiet release of his book titled The Fever and Other Stories. It offers a charming set of a dozen stories, set in diverse parts of the Goa we grew up in, telling you about the intricacies of local life, the travails of its people and the complex lives even simple people have to often cope with.

José explained how he got things done: “I put together 12 of my stories and self-published a little book.  [It’s] under my new imprint Miskutt, which seeks to give readers a taste of literature from Goa in English and Konkani in a pocketbook format. Miskutt means ‘pickle’ in Konkani.” The book size is 4.75 inches x 7 inches, 112 pages thick, and is priced at `200. Its attractive cover is by Shawney Coutinho, when a student at the Goa College of Art. Instead of a formal launch for the book, José decided to simply gift copies to his close writer friends.

José’s stories are intriguing, carefully written and he obviously spends a lot of time polishing each one. Quite some time ago, when he was speaking to (mostly engineering) students at the BITS-Pilani Goa campus, he explained with precision how he conceptualised some of his favourite short stories, worked on it, and gave it the final polished shape. Check out that talk at http://bit.ly/JoséLourenco

In that talk, he explains the “act of creation”, or the process of crafting a short story. As an engineer, he says he wants to understand how a short story comes about.

José’s stories grab your attention right at the very start. One with an intriguing title (‘Zemanuel’) begins: “Esmeralda had become a problem. Her spinster sister Esther had died, leaving her alone.” ‘Zemanuel’ is a story of an elderly lady, alone at her home which she refuses to leave for a home for the aged.

Then, ‘Stopping at Nothing’ says at its very start: “Bholanath’s bulls froze as though a red traffic light had just lit up right in the middle of the paddy field.” This is the story of what happens when a rustic farmer’s bulls simply refuse to plough a section of the fields. It is an unexpected story with many twists; the response of diverse people to what seems like a simple event is particularly gripping.

You can’t help wondering: what’s going to happen next? But if you’re expecting some dramatic resolution at the end of the story, you might be disappointed. José’s stories’ charm lies in the narration, the way he depicts life and struggle. You could almost call these parables on modern Goa.

‘Higher Ground’ is a story of colonialism in Goa, but not in the way you might anticipate.

‘Mapusa-bound’ tells the quiet desperation of a woman who is attracted to a strange man on the bus. Another story with a brief one-word title, ‘Saibinn’, is about religion and how we deal with conflict-within at varying levels.

Other stories tell of insomnia, villagers being evacuated for a safety drill and the many complications it causes, the pull of home for a migrant who visits Margao in a dream (or, is it really?), the fantasies of a man visiting his doctor’s, and the turmoil caused by a Vastu prediction.  José Lourenço seems to have the ability to take the most mundane of topics and convert these into charming narratives.

His title story ‘The Fever’, he has himself called surrealistic. In the story, a man falls ill when his shadow – you heard that right – catches a fever. So how does one deal with it? Based on this story, a film Zor even made it to the 2015 New York Indian Film Festival.

Meanwhile, in another story, Orville Pinto and five others suddenly barge into the Collector’s office and demand their right to “cancel” their birth certificates, and all other official documents. How do you think a story of this kind would resolve? You’d be surprised…

Some of his stories, José says, were based on real-life events and he had to add just “five to ten per cent” of a twist. Even dreams have been a source for his creativity.

José has various interesting ideas. The other day he was suggesting that writers gift books to each other. As he put it: “(If we have each other’s addresses) we can also start posting and gifting each other second-hand books. It doesn’t cost much to post a book within Goa, barely 20 or 30 rupees. It’s a great delight to receive a book by post, especially from a discerning writer-friend. And the Indian postal service is still going strong in these trying times.”

The short-story writer, essayist and translator (in Konkani and English), besides The Parish Churches, has also created The Wit and Wisdom of Ancient Goa. This is a box-shaped card-compiled collection of Konkani proverbs.  José has edited the weekly now extant Goa Streets and was vice president of both the Konkani Bhasha Mandal-Goa and the Goa Konkani Akademi. He also co-edited the Inside Out anthology of the Goa Writers.

“I’m not a famous writer. I have no claim to fame. I’ve not published a single book of short stories,” he said almost a decade ago, in early 2011. Well, his first book is out, and it’s a great read.  Unfortunately, there’s little recognition for Goans who write in English.

José strikes you as the typical Goan intellectual of our times, who is not only not recognised sufficiently back at home, but also finds it hard to meet his potential in a place like ours.

When spending time in the Gulf, he would email friends back home narrating how he got stuck in a four-hour-long traffic jam, doing nothing. If he was in Goa, then getting his skills recognised and compensated is a challenge. One only hopes people like him will get their true rewards from where it matters most – the reader.