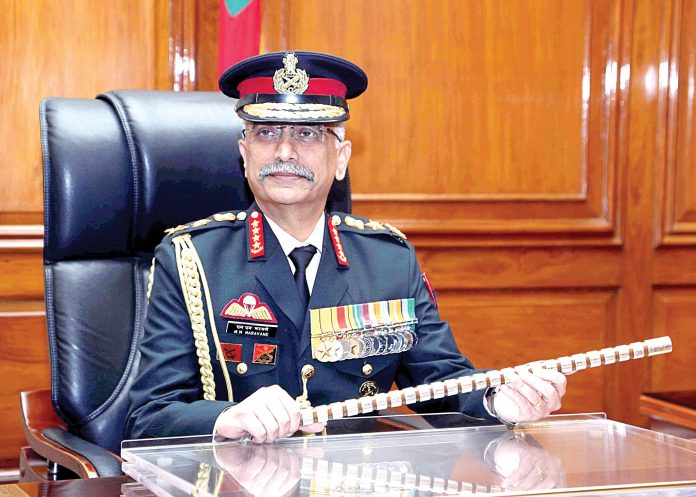 Indian Army chief, Gen Manoj Mukund Naravane, will be visiting Nepal for two days early in November in a bid to strengthen the bilateral relationship that was undergoing through a rough patch.

Naravane would be conferred the honorary rank of general of the Nepali Army at an investiture ceremony during his visit.

His visit, seen as an attempt to reboot the relationship between the two countries and explore further avenues for defence cooperation, follows Research and Analysis Wing (RA&W) chief Samant Kumar Goel’s visit to Kathmandu on Thursday where he also met Prime Minister Oli.

Goel’s discussions with Oli focussed on not allowing any interruption in friendly relations between the two countries and resolving all outstanding issues through dialogue and continuing mutual cooperation.

Ties between the two countries came under strain recently after China increased its influence in Nepal.

It was India’s road construction in the Lipulekh area at 17,000 feet that had sparked a diplomatic row as Kathmandu claimed the area to be its territory. The road was constructed to shorten the travel time for pilgrims visiting the Kailash Mansarovar.

Lipulekh is a tri-junction between India, Nepal and China situated atop the Kalapani Valley in Uttarakhand. After this, Nepal brought out a new political map showing the contested area as its own. India has rejected this new map, saying it is not based on historical facts or evidence.

Taking the strains between India and Nepal as an opportunity, China, which is already having a border dispute with India in eastern Ladakh, increased its troop deployment at Lipulekh.

Its 150th Light Combined Arms Brigade was moved in August to the Lipulekh tri-junction, while the People’s Liberation Army had also reinforced troops in Pala, around 10 km from the Indian border.

Women safety, children’s issues should be the priority of all govts: child CM