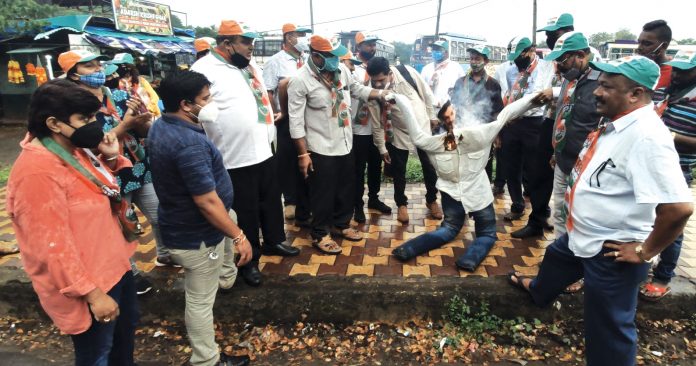 After being denied permission by the Fatorda police to burn the effigy in front of the BJP’s Margao office, the Congress party members led by district president took to the area on the opposite side of the road to burn the effigy of Naik shouting slogans.

Speaking to media persons after burning the effigy, South Goa district Congress president Joe Dias condemned the statements. “The statement of Damu Naik calling those working abroad as frogs is wrong. We condemn this statement in its entirety. It is because of these Goan diaspora that the economy of our state is alive. The BJP is out to ruin the country. They are only lying,” he said.

Goa Pradesh Congress Committee vice president Althin Gomes meanwhile called for an apology. “Our diaspora have gone out of the state not to enjoy life but to earn a living. They all still have homes here in Goa. They are carrying forward the Konkani language in the countries where they work. They have better knowledge of what is going on in the state and keep a watch on everything that is happening here. BJP has to apologise and Damu Naik has to withdraw his comment because this is a shame,” said Gomes.

Congress leader Royla Fernandes said, “We stand united with our members to condemn the statement of Damu Naik. Any comments by our diaspora regarding the state of Goa should be used to help make our state better. They go abroad because they find it better to earn a living rather than here but at the same time they are also bringing revenue to Goa. Their families are also living here. Calling them frogs is inhuman and the comment has belittled the dignity of a human being.”

NCP serious about Goa, many state leaders in touch: Praful