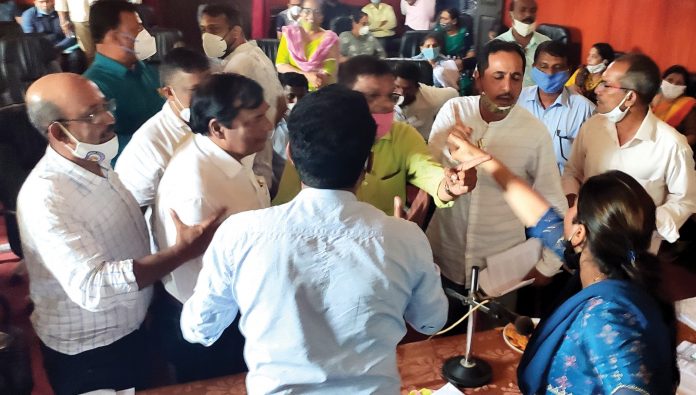 Chaos reigned supreme at the two-and-half-hour-long meeting of Margao municipal council (MMC) on Thursday with members jostling, flinging papers, rushing at the chairperson’s chair and banging the table. All the COVID norms were thrown to the wind with councillors crowding at the chairperson and chief officer’s table.

Opposition councillors affiliated to BJP and Congress questioned the ruling Goa Forward Party (GFP) council with the chairperson Pooja Naik pacifying them on a couple of occasions.

There was chaos at the meeting on the issue of confirming the approval accorded by the standing committee to set up seven bio-methanation plants at Sonsoddo, which the opposition councillors alleged is of high cost and there is a ‘setting’.

MMC chairperson Naik became furious at the BJP councillor Arthur D’Silva for uttering the word ‘setting’ and said that the bio-methanation plant is being put up by the Goa Waste Management Corporation (GWMC) through the GeM portal. To this, BJP councillors Rupesh Mahatme, Ketan Kurtarkar and others came rushing at the chairperson and flung the copies of the minutes on her table.

Congress-backed councillors Doris Texeira, Manoj Masurkar, Avinash Shirodkar and Deepa Shirodkar, joined the bandwagon and registered their opposition to the setting up of the “high-cost” bio-methanation plants at Sonsoddo. There was no clarity over
the issue.

Chaos returned back when the issue of transfer of a shop was discussed and the concerned councillors pointed out that the owner is dead and that the MMC will not transfer it in the name of the dead.

The councillors rejected the request of the director of Municipal Administration of putting up solar system atop the municipal building on the grounds that the heritage importance of the premises will be lost.

Decision on the proposal of introducing pay parking along Margao road was also deferred. A resolution was adopted to write and remind all government departments, under Section 51 of the Goa Municipal Act that they cannot carry out work in its jurisdiction without intimating the civic body.

The councillors unanimously disagreed on waiving sanitation fees for the South Goa hotels and restaurants. It was resolved to install a statue of Dr Babasaheb Ambedkar in Margao after completing necessary formalities.