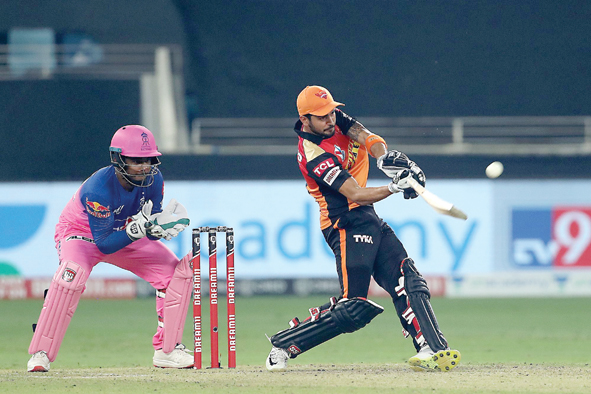 An unbeaten 140-run partnership for the third wicket between Manish Pandey (83 not out) and Vijay Shankar (52 not out) guided Sunrisers Hyderabad (SRH) to an eight-wicket win over Rajasthan Royals (RR) on Thursday and kept their team in contention for playoffs of the Indian Premier League (IPL).

SRH chased down a target of 155 with 11 balls to spare after surviving the early headway made by a fiery early spell from Jofra Archer (2/21) at the Dubai International Stadium on Thursday.

Shankar hit a four to take SRH over the line and bring up his half century off the first ball of the 19th and penultimate over of the innings. While Pandey hit eight sixes and four fours while Shankar hit four fours.

Archer gave RR a strong start to their defence, dismissing SRH openers David Warner and Jonny Bairstow in his first two overs. SRH were on 16/2 wickets when Shankar joined Pandey in the middle. Smith took Archer off the attack after which Pandey went on the counter and shifted momentum back his team’s way.

While Shankar took the role of holding up the other end, he shifted gears after the 12th over and eventually took on Archer himself. Smith decided to let Archer bowl his last over in the 16th and while the England fast bowler had figures of 2/8 wickets at the start of the over, Shankar hit three consecutive fours off him to all but end RR’s chances of making a comeback.

Earlier, Holder led the way as SRH restricted RR to 154/6 wickets. Brought in as replacement for the injured Kane Williamson, Holder took the important wickets of Sanju Samson (36), RR captain Steve Smith (19) and the dangerous Riyan Parag (20) and ended the innings with figures of 3/33.