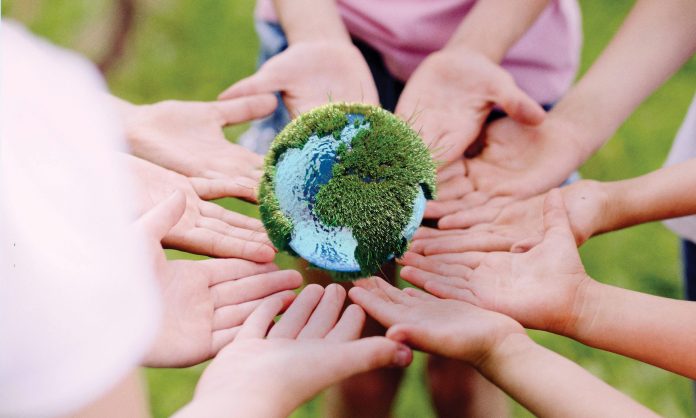 We live in an age of distress. From the current COVID-19 crisis to global warming and climate change; there is a lot to worry about. And based on these daunting statistics, the state of our planet seems far from utopian.

But on the upside, an increasing number of people are now standing up to save the planet by making conscious choices.

Living in Goa for the past 18 years taught UK-born Lolski Cooper simplicity, efficiency, appreciation of nature, and living sustainably. Cooper reveals, that from a young age, she instinctually had an ‘inner knowing’ that nature provides everything that we need. And with a love and respect for nature, sustainable living also came naturally,
she says.

The first step on this journey, she says, is becoming aware of how you live, asking yourself how you can live better for the planet. “One can simply begin by choosing to eat a more plant-based diet and using less water. Walk where you can, take public transport, or share vehicles,” says the kinesiology practitioner and flower therapist.

Similarly, once you know that plastic isn’t good, you automatically become aware of how much you use and how to cut down. “An easy step is to carry your own water bottle. Refuse straws and single-use plastic; carry your own containers and cutlery. Buy products with less packaging or learn to reuse plastic pots, etc, and of course carry your own grocery bag,” she says.

She goes on to describe this way of living as “an exciting challenge” and in the process has gained so much knowledge and awareness of the body’s innate way of healing itself. The human body is built to heal itself, she emphasises.

Further, Cooper believes that natural remedies can serve as alternatives to chemical agents and antibiotics. In fact, there is no other way, she says. “Natural remedies support our health and well-being, making us stronger, fitter and healthier in body, mind, and spirit. We become more aware of our own body, and how it functions, consciously eating better and taking the time to rest and heal. It may take a little bit longer to cure a disease naturally, yet we recover with a stronger immune system, feeling more vital, and ultimately our body functions better too,” she says.

And in India, she adds, there is so much goodness available with turmeric, ginger, cinnamon, tulsi, neem, etc. “We need to go back to the old ways, the knowledge is there.”

While Vaishali Chauhan, the founder of Dhairyansh Green (The Wasteless Store) in Panaji, agrees that natural remedies are great, she states that it’s not an easy fix. “If you’re seeking a more natural approach to healing a chronic disease, you have to do it consistently and give your body time to adapt, grow and build its immunity. And eventually, you won’t need to rely on chemical agents and antibiotics as much,” she says, adding that someone who has never opted for natural alternatives before cannot expect ailments to suddenly vanish from the get-go. A good practice to consider is utilising natural treatments along with standard medicine, she says. “In our home, we always take our haldi, ginger, and honey mixture every day whether we have a cold or not because we know over a period of time it helps in building immunity,” she says.

Chauhan’s sustainable journey began soon after a Himalaya trek with her family where she experienced the beauty and restorative powers of the place. Soon after, on a visit to a science exhibition, she learned that due to global warming in the next 20-25 years, the Himalayan region would turn into deserts and breeding spaces for mosquitoes. “This really hit me hard,” she reveals.

“Climate change and global warming are real. We can see it. In October, it’s raining like it’s the month of June. If you want to leave a better planet for the next generation, we need to change now. All it takes is one step at a time,” she says. Chauhan thus started actively reading up and learning more about global warming and climate change. “I decided to change my lifestyle and, in a bid to promote a sustainable lifestyle, I founded Dhairyansh Green to provide sustainable alternatives to people,” she says. At first, choosing this lifestyle proved challenging. However, she soon found support in the many sustainable groups and zero-waste communities online.

But in Goa, she admits she faced snide looks and comments when she initially started carrying out sustainable practices. “For example, whenever I’m dining out, I carry empty containers with me so that if there is any leftover food, it doesn’t have to be packed by the restaurant into single-use plastic containers. Whenever I do this, people stare or make comments. Of course, none of this affected me because I knew I was doing what was right,” she says.

Under the banner of Dhairyansh Green, Chauhan also conducts awareness talks on sustainable menstruation, how to live a wasteless and sustainable lifestyle, and more. She recalls delivering a talk at the Dr KB Hedgewar High School where the committee members were so moved that they announced that the school would go plastic-free. “It was a proud moment because I realised that I was able to bring about a change in someone’s lifestyle no matter how young and how small,” she says.

Meanwhile, Panaji-based Siddhi Ghadi chose the green lifestyle two years ago when she moved to Edinburgh. “My lectures in university sometimes centred around the development of ethical and organic products, which led me to research these topics and how they impact the planet positively,” she says.

And according to Ghadi, it isn’t difficult to adopt a natural lifestyle. “The mass production of cheap products has been so commercialised that the concept of an organic lifestyle has taken a back seat or is even considered more expensive. However, as a student living on a very tight monthly budget, I have found it extremely economical and efficient,” she says, while giving the example of using soap nuts instead of laundry detergents. “They are not only cost-effective but can be used several times to wash a load before they can be added to compost. This is helpful for the planet and is definitely better than chemically enhanced artificial washing powders,” she says.

As a student of design, Ghadi reveals that she feels responsible for what she consumes and what she creates and markets. “My main concern was the environment. The first step I took was going vegan and shopping in stores that promoted small-scale industries selling organic products,” she says, adding that she began promoting this lifestyle via Instagram and soon received several messages from newbies asking about the journey or for more information regarding the concept of a natural lifestyle.

“Change doesn’t happen overnight, and if you start small by maybe supporting your local shop selling organic food on certain days, second-hand shopping, or even deciding to not eat meat on certain days – it still makes a big difference over the course a week, a month, and a year,” she says.

Director at Goa Medicare Devices Private Limited, Verna, Anup Sardesai, also agrees. “My shift to a more natural lifestyle was actually gradual and unplanned. It started with small changes to the products we use at home and the food we eat. As we started noticing small but incremental improvements in our lives and particularly our health, the motivation to adopt a natural lifestyle increased.”

And being in the wellness industry, Sardesai observes that Goans are very aware and always willing to adopt a natural lifestyle. However, with mass-produced and chemically enhanced products easily available in the market, making a conscious effort to go green is a challenge. “The definition of what constitutes a natural product used in a commercial context is very shaky as most commercial products need to be chemically stabilised and standardised. Even most off-the-shelf Ayurvedic products are only natural by a very loose definition. Genuine organic produce is very hard to source and is best grown in our own backyard, which limits both quantity and range,” he says.

But despite the challenges, the benefits are plenty. “The first thing you start noticing are small but incremental health benefits. These are precursors to significantly longer-term health benefits as we gradually reduce and eliminate the toxic chemicals from
our lives,” he says.