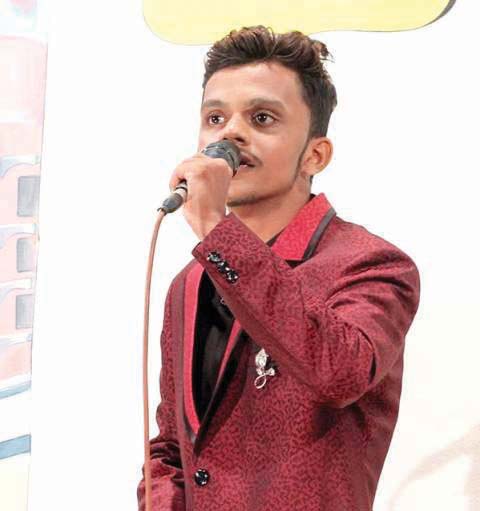 Maythan Barretto made his debut on the Konkani stage when he was just three years old. Today, apart from lighting up the stage with his acting, he also charms the audience with his singing prowess

Ribandar has a tradition. ‘Dha Zanacho Tiatr’ is staged annually on the third Monday of January, the Feast of Infant Jesus. This has been a tradition for the last 118 years. Actors from the village perform in the tiatrs with the help of some professionals, only ladies. In this wonderful tradition, the young Maythan Barretto made his debut on the Konkani stage when he was just three years old. “My dad, Tony de Ribandar who is a professional tiatrist, wrote the lyrics which I sang before a big audience,” he remembers.

Earlier, his mom Meena, was also into acting in one act plays and village tiatrs. And thus, it was quite natural for Maythan to also fall in love with the stage and he was a regular in competitions for acting and singing, representing Don Bosco High School, Panaji. “At a very young age, I made my debut on the professional stage, in ‘Sounsar Sompo Porian’ by Comedian Dominick. I rendered a solo and received a big applause. I am grateful to Dominick Sir, for the trust he had in my talent,” he says. After this, as a child artiste he continued with ‘Goemkara Tum Ragar Zainaka’ and ‘Ami Goemkar, Tumi Konn?’ by Roseferns, ‘Maink Lagon’ by Comedian Sally and ‘Osleo Suno’ by Tony de Ribandar. Maturing into a fine teenage actor, he made a wonderful entry in the two Mario Menezes’ tiatrs on the life of students, ‘100%’ and ‘College Life’. “I acted in the main story for the first time and in these two shows, my director displayed my acting talent, for which I am grateful,” he says, adding that young actors should always respect senior artistes, and listen as well as learn
from them.

“Parents too should encourage their children if they want to act or sing. I am grateful to my parents for the support I received and thankful to God, for all the gifts bestowed on me,” he says.

Besides acting, Maythan has lent his voice to a number of audio discs including ‘Goenchem Rajkaronn’, ‘Indian Passport’, ‘Postman’, ‘Tunch Mhojem Sukh’, and ‘Amchea Bapa’. “My dad composes all the lyrics and on stage I have performed duets with other artistes, sung on Konkani DVDs, and have uploaded my videos on social media,” he says.

The youngster who loves movies and is a good sportsman having represented his school and college at the state level, has a great wish to join the Army.  “My grandfather was an army man, and I want to take up his profession. In my free time, I will definitely perform in tiatr,” he says.