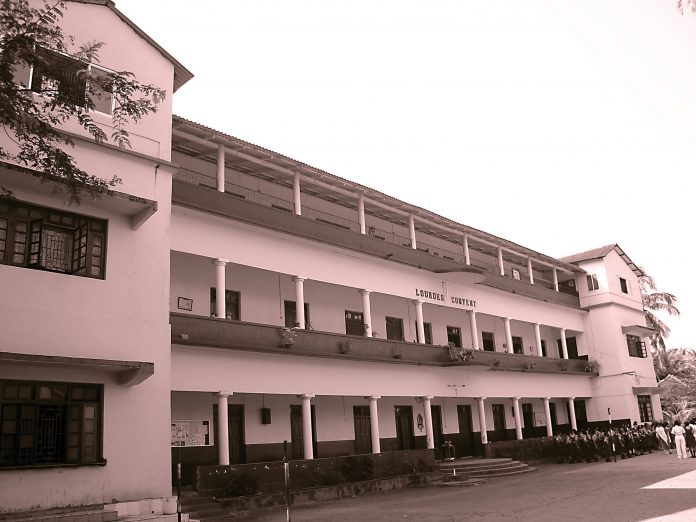 Sometimes, we take an issue seriously only when we see it in print. In the past, people would believe things only when they saw it in, say, a newspaper. The same is true about books, as one was reminded by a new book on my neighbours.

‘Pray and Celebrate: FMCK’ by Sr Vandana Solanki, is a 268-page hardbound book on an unusual, hardworking and seldom publicity-seeking congregation of religious nuns.

Formally they’re called the Franciscan Missionaries of Christ the King, or FMCK.  When we were kids, we would sometimes jokingly describe them as the “Signal toothpaste” nuns. (Their saree is white, and has a three striped-lined red border, much like that brand of toothpaste once did.)

More importantly, the FMCK congregation was founded by a daughter of Goa, Mother Bridget Sequeira.  She hails from the Saligao village’s vaddo of Sonarbhat, where the local provincialate in India of St Clare’s Province is based.

Today, the seed planted by this Goan nun has reached many places and many people. Nuns from Gujarat, Kerala, even countries beyond India’s current borders, work together in rare unity to achieve their mission.

This book gives us an idea of the growth of a dream, shaped by many women from near and far. The FMCK has its convents at Old Goa, Sharjah (UAE), Jharkhand and Pakistan’s Punjab region (Lahore, Sialkot and two other places). It has nine more in the Karachi area.

In western India, it has its presence too. Some 20 convents, homes for the aged and other institutions span Saligao, Moira, Dhabal, Panaji, Candolim, Pomburpa, Cavelossim, Calangute, Sion-Mumbai, Vasai, Nagar Haveli, Kurla-Mumbai, Thane, Pune, Bhayendar and Sindhudurg.

There are nine more institutions in India’s Hindi-speaking belt, and seven in Karnataka and Kerala.

Its founder, Mother Bridget, like most Goan achievers who’ve done something worthy outside their home, remains largely unknown or forgotten outside a small circle. Fortunately, an earlier book tells her story. It was written in now-distant Karachi (but a place that was once a prominent centre of Goan emigration prior to Partition). The book is titled ‘Footprints on the Sands of Time’ and was authored around 1988 by Sr M Ursula.

Bridget was born in Bushehr (in what was then Persia) in 1905, to Goan parents. Her father worked at the British Residence, in the Foreign and Political Department. One could safely assume that access to English education early in a few parts of Portuguese-ruled Goa gave expat Goans access to such jobs in those times.

‘Footprints on the Sands of Time’ continues with the story.

Put briefly: the father of the lively child “Biddy” retired in 1911, while his eldest son replaced him at the British Residency. The family set sail for Bombay, lived in a rented flat in the city, and then moved to salubrious Belgaum as one of their daughters was unwell.

Bridget’s sister passed away in 1912, and five months later, their dad died when she was just seven.  Bridget’s brother-in-law invited the family to Karachi. There, the future foundress studied at St Joseph’s Convent.

She taught too at St Joseph’s Convent, and then St Patrick’s, the boys’ school. Both institutions have had their major impact on Karachi, with the latter being the alma mater of figures like Lal Krishna Advani, Musharraf and hundreds of Goan youth settled there.

Sometimes, some help at the right time can go a long way. Spanish and German Jesuits were looking after the churches in Sind in those times, and are credited with recognising the future foundress’ talent and commitment. (Incidentally, another set of Iberian Jesuits reached Lahore via Akbar’s palace and Goa way earlier in the sixteenth century.)

The rest of the story takes its own course.

Even despite the fact that books of this kind are written largely from a perspective of awe and appreciation, some facts stand out nonetheless.

The FMCK is the only religious congregation for women formed in the country that later became Pakistan. It has spread through various parts of South Asia. It may not strike one immediately, but its foundation predates even the better-known Missionaries of Charity founded in Calcutta in 1950. At some point, Bridget Sequeira was also elected a member of the municipal council in Karachi.

During a visit to her home village of Saligao in 1946, Mother Bridget was handed over a small school that was being run by her aunt, Etelvina de Melo. This has grown into an impressive institution, Lourdes Convent. Over the years, in the same village, the nuns have set up two homes for the aged, a section for children with special needs, and the women’s home Sanjoe Niwas.

This book itself, authored by current provincial Sr Vandana Solanki, focusses – understandably – more on the religious aspects rather than claiming credit for real work done in the real world. Yet, hints of the FMCK story do emerge.

Over the decades, one can only imagine the amount of labour put in by such institutions. Offering quality education at affordable rates (even when government grants for teachers’ salaries were not available), taking care of the elderly (though some look down on aged homes, given Goa’s high outmigration these are the only option for some), and the like.

It’s easy to take for granted those working silently and contributing quietly to society. In such cases, one wishes that more stories from alumni, retired teachers, villagers and the nuns themselves could make for a more complete narration of the human lives spent, sweat and tears that went into creating such endeavours. Realities like these only remind us that often it is woman-power that can sustain and build, even – or especially – in the world of religion and education.