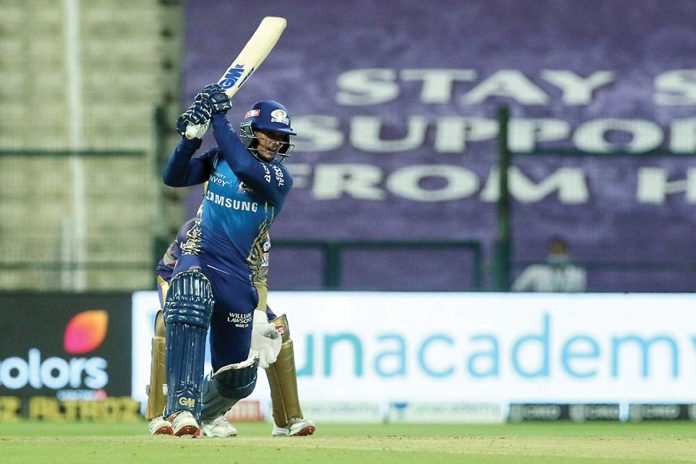 The Mumbai Indians juggernaut rolled on unabated as they recorded their fifth straight win with an eight-wicket mauling of Kolkata Knight Riders in the IPL on Friday.

A tidy bowling effort by Mumbai Indians ensured that KKR were restricted to 148 for five after an unbeaten 53 by pace spearhead Pat Cummins.

Then, the defending champions rode on a blistering 44-ball 78* by Quinton de Kock, to chase down the target with 3.1 overs to spare.

De Kock, who struck nine fours and three sixes and skipper Rohit Sharma (35 off 36 balls), laid the foundation for
the emphatic win with their 94-run first-wicket stand.

The two openers took the KKR attack to cleansers with de Kock being the more aggressive one. The South African notched up his fifty in just 25 balls, with a maximum over deep-square leg.

It rained boundaries for Mumbai as the two dominated the KKR bowling attack.

Pacer Prasidh Krishna (0/30) faced their brunt, conceding three fours in the third over and de Kock followed that up by hammering Cummins (0/28) for two successive fours, both pull shots, in the next.

De Kock kept playing shots all around the park and was again brutal on Prasidh, whom he hit for two fours and a six, in the seventh over, which fetched Mumbai 16 runs.

KKR tried to pull things back by removing Rohit and Suryakumar Yadav (10) in quick succession, but de Kock continued his onslaught with gusto and took the side home in the company of Hardik Pandya (21* off 11 balls), who played a small cameo.

Opting to bat, Kolkata lost opener Rahul Tripathi (7) early, courtesy a sensational catch by Suryakumar Yadav at point, in the third over off Trent Boult (1/32).

It became 33 for two as Nitish Rana (5) perished cheaply after he was caught by de Kock off Nathan Coulter-Nile (1/51) as a short ball worked for the Australian pacer in the sixth over.

Leg-spinner Rahul Chahar (2/18) struck twice in the eighth over, removing the young Shubham Gill (21) and Dinesh Karthik (4) off successive balls and reduced Kolkata to 42 for four.

While Gill holed out to Kieron Pollard at long-on in an attempt to accelerate the run-rate, Karthik played onto the stumps at the Sheikh Zayed Stadium.

KKR lost half their side for 61 as Andre Russell perished for 12. A bouncer from Jasprit Bumrah (1/22) did the trick as Russell lobbed off a sitter to de Kock.

Indian women’s team can qualify for FIFA WC, before men’s team does: AIFF