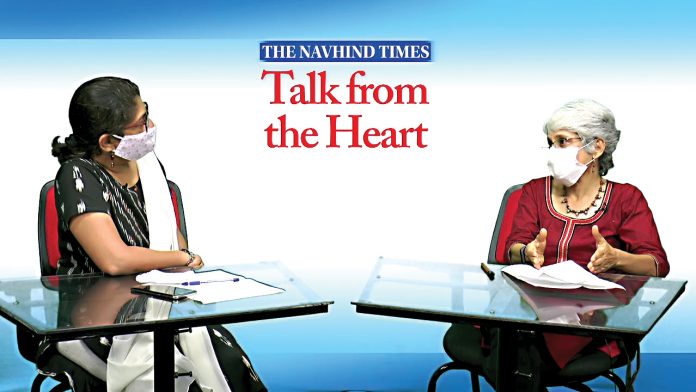 October is ADHD (Attention Deficit Hyperactivity Disorder) awareness month and to get a better understanding of ADHD, Nandita de Souza was invited on The Navhind Times – Talk from the Heart show that aired live on the Goa365 channel on October 11. A developmental and behavioural paediatrician with more than 30 years experience, de Souza is also the co-founder and director of Sethu, a charitable trust which helps children get the best out of their lives as they grow and develop.

After a brief self-introduction on the show, de Souza explained what ADHD is all about and stated: “It is a very misunderstood condition and has nothing to do with bad parenting, children wanting to be naughty, or draw attention to themselves.” The neuro-developmental condition, she said, is characterised by three main features, namely inattention, restlessness, and impulsiveness. She stressed on an accurate diagnosis which she said is not based on a blood or other laboratory tests. “Of course PET scans and MRIs are sometimes done but they are not diagnostic of ADHD and are only done in research settings and not in daily clinical practice,” she added.

Elaborating further on the diagnostic procedure for ADHD, behaviour, she said, is the basis for diagnosing the condition and added: “To ensure that we are not over-diagnosing, the behaviour is assessed in two different situations. One is the home and the other could be school, tuition teacher or the sports centre for a child, and workplace if he or she is an adult.” She also spoke about the minimum number of symptoms a child has to fulfill before going for further tests to confirm the condition. “Functioning in the home, in the school, among peers, and in society is important and also assessed.” She then spoke about other conditions that mimic ADHD like depression, anxiety, hypothyroidism, hearing disability, etc.

Elaborating on the role of dopamine, a hormone and neuro transmitter found in the frontal lobe of the brain which is required to pay attention, she said: “The frontal lobe takes 25 years to develop even in neuro typical people, hence we find teenagers doing risky things and making impulsive decisions. And we think, what were they thinking? But the fact is they weren’t as their frontal lobes are still developing. So whether you have ADHD or not, every one should learn about brain development as this will help in understanding not just themselves but also their children, friends, family members, colleagues, etcetera.” A high protein diet along with exercise, she said, helps keep the dopamine levels high. “Sleep is also equally essential, at least eight hours, to have good executive functioning.”

Asked what causes ADHD, she replied: “We still don’t know what causes it but there are several factors that are responsible. There is a strong genetic component and heritability is about 80 per cent. Other causes could be an extremely premature birth or drug addiction in the mother during pregnancy. But most often we do not find any cause.” She then spoke of an early diagnosis to help the child as well as train the parents, because how the child is handled, she stressed, makes a huge difference. She also highlighted the salient role of the teacher in this condition and added: “People with ADHD need a lot of compassion, acceptance, and structure and a teacher who understands this will not take the child’s behaviour or comments personally and hence behave as needed. “

Answering a question sent by a viewer asking how to break the hyper focus loop, she replied: “People with ADHD tend to hyper focus and this is due to their selective attention. When they are engrossed in something that they enjoy, they will stay focussed for hours. So to break this, self-awareness and structure is required both by the parent and the child.” Giving simple examples and steps she explained how to overcome this hurdle with timetables and written reminders. “Rewards, especially immediate rewards too, help children and motivate them to complete their tasks,” she added.

Several other queries were answered and many doubts cleared. The talk was extremely informative, and created as well as increased awareness of ADHD.

Battle of the minds

School of Symbiosis pays tribute to Gandhi and Shashtri