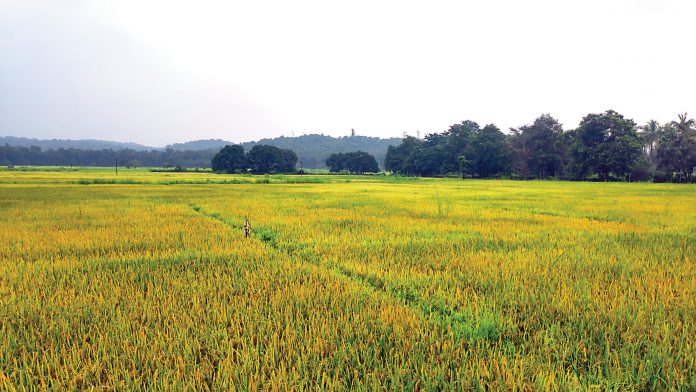 With proper motivation and support to farmers from the agriculture department, acreage under paddy cultivation in the Dharbandora taluka has increased by almost 40 per cent this Kharif season with around 100 new farmers returning to paddy farming.

As per information, around 60 hectares of new land was brought under paddy cultivation this season, including 44 hectares of land which was left fallow.

According to zonal agriculture officer Nagesh Komarpant, many farmers in Dharbandora taluka had given up farming especially paddy cultivation due to nuisance of wild animals and the booming mining business in the area in the past few years, leaving huge land fallow. But after the stoppage of mining activities, the agriculture department focused on motivating people from this area to take up farming, sensitised them about the effective farming practices for better income and also provided them with support to get rid of the wild animal nuisance following which many farmers have returned to farming and cultivated their fallow land.

In the Vakekon area in Shigao village, 30 hectares of fallow land has been brought under cultivation by around 70 farmers wherein the agriculture department has provided farmers with around 2.1 km-long solar fencing with 90 per cent subsidy helping them to curb the wild animal nuisance.

Along with the assistance from agriculture department, a mining company and also local MLA too helped some of the farmers to cultivate their fallow land, ZAO Komarpant stated.

In Vagon area, around 10 hectares of land lying fallow since the last 12 years has been brought under cultivation this year, wherein Vedanta company has provided some assistance to around 35 farmers for cultivation. While the local MLA has supported some farmers in Mollem-Collem villages by providing assistance, ZAO said.

“Motivation and effective support from the agriculture department have played a vital role in bringing us back to paddy cultivation. Secondly, mechanisation has reduced some of the hard labour required for cultivation and even for harvesting and taking note of the same I have given a shot at paddy cultivation this season,”  Eknath Khedekar, a journalist turned farmer from Shigao-Dharbandora said. He has brought around 1 acre of land under paddy cultivation which was left fallow for almost 30 years.

After motivating hundreds of farmers to cultivate fallow land, the department has started motivating them for double cropping, wherein farmers are promoted to take up horticulture and field crops after paddy in the Kharif season. With this, the department is aiming to double farmers’ income by sustainable farming practices under Atma Nirbhar Bharat, Atma Nirbhar Goy Scheme, ZAO Komarpant said.

Revisit nod given to JSW, Adani for handling coal: CM to GSPCB