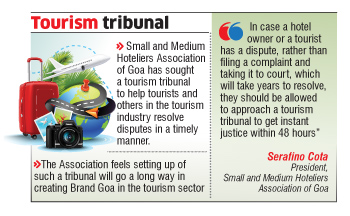 Welcoming the state’s tourism policy, Small and Medium Hoteliers Association of Goa has urged the government to put the tourism policy in the public domain for suggestions and objections.

“The Chief Minister may be painting a rosy picture for Goans but hotel occupancy in the state is not at 80 per cent. October is usually the weak shoulder of the tourism season. In the last four years, when tourism was relatively better, October saw between 27 and 36 per cent occupancy. Based on preliminary research by us, we estimate that the hotel occupancy right now cannot cross 3.7 to 4 per cent with ‘legal’ tourists,” he said.

It may be noted that the state cabinet approved the tourism policy 2020 on Wednesday.

Welcoming the tourism policy, the Small and Medium Hoteliers Association of Goa said that the policy should be put under public scrutiny. “The consultants KPMG, during the process of shaping the policy, held many meetings with us to understand our wants and needs and we are happy with the policy. We are only asking that the policy be put in the public domain for suggestions and objections since everyone in the state must be aware of its contents. We must promote sustainable and responsible tourism in the state,” said Cota adding that stress on hinterland tourism was the need of the hour.

The Association also welcomed the setting up of the new tourism board but added that more local representation was needed.

“The new tourism board consists of around 13 persons of which six are from the government itself. There must be some experts with knowledge of tourism. Right now, it seems like the board has already been hijacked by the government. Sectors including the small and medium hoteliers, five-star hotels, events management organisations, charter operators, TTAG, taxi drivers and shack owners must also get representation on the board,” said Cota.

The Association has also called for the setting up of a tourism tribunal to help tourists and those in the tourism industry to resolve disputes and cases in a timely manner. “In case a hotel owner or a tourist has a dispute, rather than filing a complaint and taking it to court, which will take years to resolve, they should be allowed to approach a tourism tribunal to get instant justice within 48 hours. This will go a long way in creating Brand Goa in the tourism sector,” said Cota.