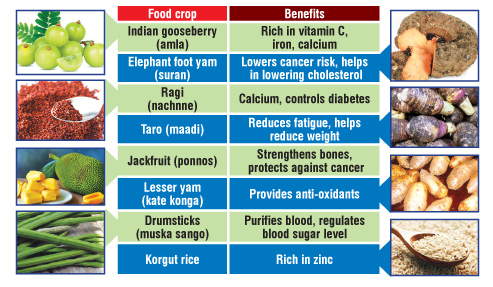 Boosting one’s immune system is crucial in these trying times of COVID-19 in order to keep the infection at bay and that is exactly what the state government is planning for the people of the state.

Kavlekar was speaking during a function organised at the Krishi Vigyan Kendra in Margao on the occasion of World Food Day.  The theme for the day was ‘Grow, Nourish, Sustain Together’.

“There are various food crops in Goa, which are rich in medicinal properties. We want to promote such crops so as to help people increase their immunity level,” the minister said assuring government support for the cause.

Director of Agriculture Nevil Alfonso explained in detail about the agriculture department’s plan to promote eight superfoods as immunity boosters.

“The department of agriculture is promoting eight superfoods of Goa which are rich in nutrition. They are the Indian gooseberry (amla), which is rich in vitamin C, iron and calcium; elephant foot yam (suran), which lowers risk of cancer and helps in lowering cholesterol; ragi (nachnne), which provides calcium and controls diabetes; taro (maadi), which helps in reducing weight and also reduces fatigue; jackfruit (ponnos), which strengthens bones and protects against cancer; lesser yam (kate konga), which provides anti-oxidants; drumsticks (muska sango), which helps in purifying blood and regulating blood sugar level and korgut rice, which is rich in zinc,” he said.

Regular classes for X, XII students are on track

Old Goa not to come under GPPDA ambit