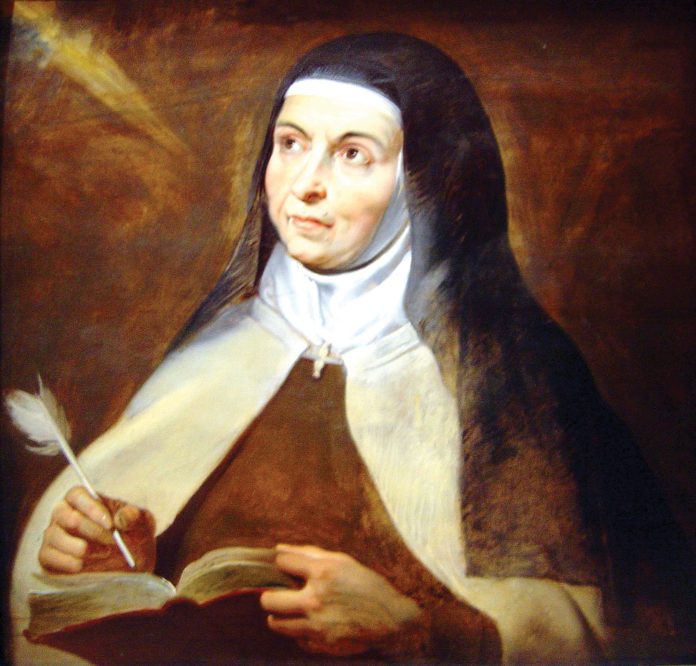 Today, October 15, the Church celebrates the feast of St Teresa of Jesus (St Teresa of Avila), a reformer and mother of the Carmelites

Born at Avila (Spain) in 1515, as a member of the Carmelite Order, St Teresa of Jesus (St Teresa of Avila) made great progress in perfection and received mystical revelations. She was the reformer of the Order where she underwent many trials which she valiantly overcame. Her contributions to spiritual life reflect her own experiences. She died at Alba in 1582.

Blessed Pope John Paul II in a letter to the Superior General of the Discalced Carmelite Friars on the occasion of the fourth centenary of the death of Teresa said: ‘She considered that her vocation and her mission was prayer in the church and with the church. She believed that the life of prayer is the greatest manifestation of the theological life of the faithful who, believing in the love of God, free themselves from everything to attain the full presence of that love.’

Her major works – ‘The Life, The Way of Perfection’ and ‘The Interior Castle’ – explain and teach us the practice of prayer. She realised that all souls take the same path to perfection, but God leads souls by many different roads. She was also aware that one has to follow a basic structure/pattern when teaching the practice of prayer. The journey to spiritual perfection is a progressive passage from the lower to the higher stages of prayer, from ascetical to mystical prayer. According to her, prayer is nothing else than an intimate sharing between friends, it means taking time frequently to be alone with Him who we know loves us.

In her first work, St Teresa teaches us the grades of prayer by using the symbol of the ‘four waters’ signifying the four methods of watering a garden. The first method consists of drawing water from a well by means of a bucket attached to a rope. This is the first stage of prayer and it includes vocal prayer and discursive meditation. This is a stage where a beginner thinks too much and makes his discursive meditation into an intellectual exercise. The individual is active, exercising the faculties, and lots of efforts are made to reap benefits. St Teresa advises them “not to spend all their time in doing so but be in the presence of Christ, and let them continue conversing with him and delighting in him, without wearying their minds or exhausting themselves by composing speeches to him.”

The second method of watering a garden is by means of a waterwheel to which dippers are attached. As the wheel is turned, the water is poured into a trough that carries the water to the garden. St Teresa explains that in this stage “the soul begins to recollect itself. This state is a recollecting of the faculties within the soul, so that its enjoyment of that contentment may provide greater delight.”

The third type of watering a garden is by irrigation from a running stream. It doesn’t call for human effort as in the methods mentioned. Prayer at this stage is mystical; that is, all the faculties are centered on God. According to St Teresa, this kind of prayer is quite definitely a union of the entire soul with God. She calls it a “sleep of the faculties” because they are totally occupied with
God.

The fourth and final method for watering a garden is likened to falling rain. This stage of prayer is totally mystical, meaning that it is infused by God and is not attained by human effort. It is called the prayer of union, and it admits changeable degrees.

In the other book, ‘The Interior Castle’, St Teresa, uses the symbol of a castle containing seven rooms/mansions, identifies the first three stages of prayer to the ascetical phase of spiritual life. The last four stages of prayer represent the various degrees of mystical prayer.

When Pope Paul VI proclaimed
St Teresa of Avila the first woman Doctor of the Church on September 27, 1970, he honoured her by conferring a title: Teresa of Avila, Teacher of Prayer. Today, her works are studied by the seekers of different faith. We need to study her to grow in spiritual life.

(The writer is a member of the Karnataka-Goa province of the Order of Discalced Carmelites based at the Carmelite Monastery,
Margao.)