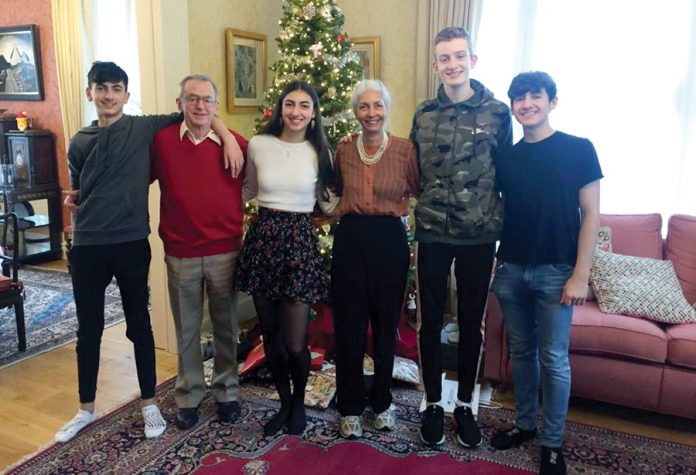 In 1966, 23-year-old medical student, Reita Faria took the world by storm when she became the first Asian to win the Miss World pageant. Overnight the dusky beauty from Bombay (as it was called then)  became an inspiration to millions the world over and also one of the best known Indians of her time. Her win literally made the world sit up and view India in a different light.

Now based in Dublin, Ireland, Reita Faria Powell is a grandmother of five and leads a relaxed life, playing golf, gardening, cooking and spending time with her children and grandchildren besides the many charitable works she is

Born to Goan parents based in Matunga, Bombay, Faria had a middle-class upbringing where religion and Catholic rituals played a major role. “I was educated by nuns all through my life and we attended mass every day,” she explains.  Incidentally attending daily mass is still a practice she continues with.

Growing up, Faria always wanted to help people in some way, hence a career in medicine was a natural choice for her. While still studying  at the Grant Medical College, she entered the Miss Bombay contest that was organised by the former Eve’s Weekly magazine. “I just did it for the fun of it; it was supposed to be a joke,” she says. “All I had to do was send a photograph to the organisers and my sister, Philomena took me to a studio to get one.”

With her imposing height of 5’8 and a regal carriage, she was then chosen to represent India at the Miss World contest that was to be held in London. Not too keen on the distraction this would bring to her education, Faria was hesitant and recalls, “My sister reassured me that I would be back in Bombay within a week’s time from the contest and that would be the end of that. It would mean a trip to London at the least.”

With no training, a limited wardrobe, three pounds (the only amount she was allowed to carry) and a makeup kit with a few lipsticks, Faria arrived in London. “After I won the Miss India pagent which was in October, there was hardly any time to get a new wardrobe stitched (in those days, we went to a tailor to get new outfits) for the Miss World pagent which was to be held in November. Also I was just six months from qualifying as a doctor, so I used to attend college every day. Hence, with no time and also being told that there would be a prize awarded to the contestant with the best evening gown, I had to borrow a saree and a bathing suit from some friends. But the organisers said that the bathing suit just wouldn’t do as it was too ill-fitting. The same for my flat footwear. With those precious three pounds, I bought another costume and some heels that were not very elegant and which I never wore again, although I have kept them,” she says.

Competing with the glamorous girls from around the world was not easy but what set her apart was her medical background, poise and intelligence. Although she won the title, she was never taken with the bright lights and fame of being a celebrity. “Medicine was always my goal and I wasn’t ready to let a fleeting moment of winning the title get in the way or let it change my life. Being a doctor was more important to me. Also a few months after winning the title, I knew it wasn’t what I wanted out of life,” she says.

Renouncing fame and fortune, she returned to her  medical studies at the King’s College Hospital, London, where she met and later married her mentor David Powell in 1971. She says that the most important thing about becoming Miss World was that it set her on the course to meet Powell. “That’s what changed my life, not so much the pageant,” she says.

After a short stint in Boston and the birth of their two daughters, the couple moved to Dublin where she continued her practice but decided to give it up when her  daughters were five and four. “Since my girls were a year apart, it was hectic. Also David’s work (as an endocrinologist) kept him extremely busy, so I decided to stay home till my girls needed me but I  never went back,” she says. Being a full-time mother, she adds, suited her very well and gave her a sense of fulfillment like no other. “The more time I spent with my children, the more I realised the positive effects it had not just on them but also on us as parents. We travelled with them, took them to the opera, went to museums and did various things to give them a broad education. But more than that, we inculcated a way of life, a way of thinking, a sense of values you do not pick up anywhere else, except from your parents.”

Reita Faria Powell is testimony to the fact that real happiness lies in following your dreams and resisting the lure of fame or fortune, which she believes can be fleeting. Real happiness she stresses lies in secure relationships. “Looking back at the 53 years David and I have had together, I realise how fortunate we have been and continue to be to date. We have each other, good health, children and grandchildren, and still so many shared interests. We are truly blessed; so what more can we ask for? We have our whole world,” she adds.

The swimsuit and shoes she wore in the pageant  and the three sashes of Miss Bombay, Miss India and Miss World 1966, will soon feature in the Moda Goa Museum and Research Centre, conceived by Wendell Rodricks.

Living a masked life on campus

A love song for Earth