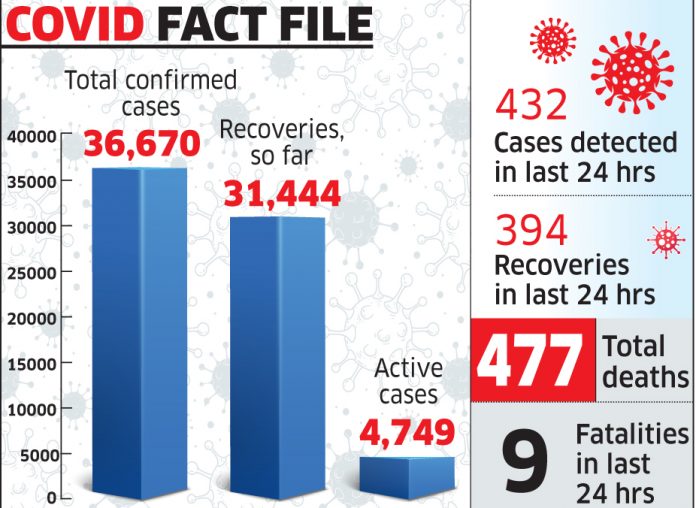 Panaji: Goa recorded 432 fresh COVID-19 positive cases on Wednesday and 394 patients recovered from the dreaded infection in the last 24 hours in the state.

With fresh cases, the confirmed positive cases reached 36,670 while with a recovery rate of 85.74 per cent, 31,444 patients, who had been infected with the virus, have been cured in the state so far.

According to the media bulletin released by the directorate of health services on Wednesday, the current active cases stand at 4,749 and the death toll linked to COVID-19 has mounted to 477 with nine fresh fatalities reported in the last 24 hours.

The health bulletin also stated that in North Goa out of total bed capacity of 545, currently 246 are vacant and in South Goa out of 1,006 beds, 687 are vacant in various COVID care centres.

Panaji: Nine more persons succumbed to COVID-19 in the last 24 hours taking the death toll linked to the dreaded virus to 477 in the state.

Out of nine deaths, five deaths were reported at Goa Medical College and Hospital, Bambolim, three deaths at ESI Hospital, Margao and one death at a private hospital in North Goa.

The mortality bulletin released by GMC on Wednesday stated that out of nine, three patients expired less than 10 hours after arrival in the hospital.