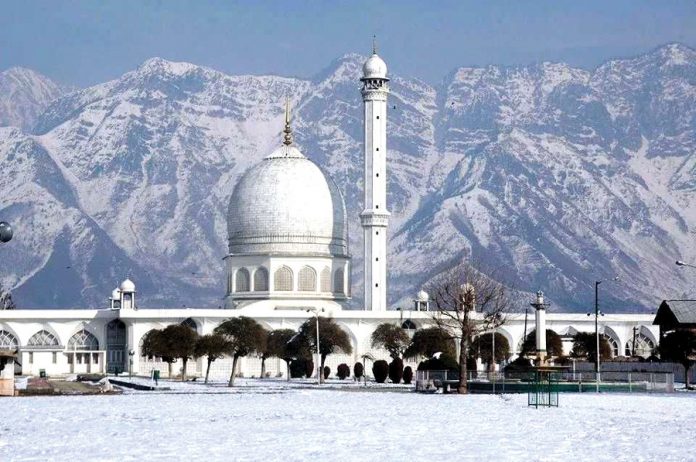 Srinagar: Amid the COVID-19 pandemic, the Srinagar administration carried out the work on restoration of historic buildings and conservation of old shrines of all faiths under the Smart City Mission at a steady pace.

Deputy Commissioner of Srinagar Shahid Iqbal Choudhary reviews progress of the work on restoration of shrines, temples and churches of historic importance regularly in the middle of managing the pandemic and dealing with other important matters of the city.

Quoting American conservationist Mollie H Beattie — “what a country chooses to save is what a country chooses to say about itself” — Choudhary says, “We owe this to our future generations. Due to militancy of nearly three decades the attention has drifted towards law and order. But at the end, the guns will fall silent and the historical heritage will speak for the city.”

As a pilot project, 39-year-old Choudhary and his team took over the renovation of a 19th century church located on the foothills of Shankaracharya hillock and the famous Raghunath Temple on the banks of the Jhelum river in downtown Srinagar city.

Restoration of shrines like Khanqah-e-Moula and Khanqah Naqshband Saheb has been taken up under a conservation and heritage revitalisation programme.

“Even parts of Hazratbal Shrine approach has also been developed under conservation and beautification plan besides improving façade around the historic Jamia Masjid which is nearing completion,” he said.

He said there were many requests for including Raghunath Temple and it was taken on a priority basis.

Located on the banks of the Jhelum in downtown city of Fathekadal, around 10 km from city centre Lal Chowk, the temple was constructed by first Dogra ruler Maharaja Gulab Singh in 1835.

The historic Raghunath Temple has remained abandoned for last more than three decades and was taken by Choudhury, who is also CEO of Smart City project, for restoration as a part of heritage revitalisation project.

“The work was started a month ago and likely to be completed by December end,” Choudhary, an IAS officer of 2008 batch, said.

Dedicated to Lord Rama, the temple, which was upgraded in 1875 by Maharaja Ranbir Singh, is also known as Ranbir Swami Temple.

A look at the ongoing work would reveal that it was continuing steadily even during the pandemic. “The restoration work includes dismantling of unsafe parts, scaffolding externally, roofing, planks, lime surkhi (burnt clay), plastering, deodar (finest wood) based ornamental eves boarding, devri stone flooring and footpath, lighting,” he said.

The abandoned Saint Luke’s Church on the foothills of Shankaracharya hillock, which was established in 1896 by two eminent doctors Dr Earnest and Dr Arthur Neve, is also being restored.

The church has remained abandoned for several decades now and the damage to the structure in past many decades has been enormous, Choudhary said and added that it was painstaking exercise by planners to work on the conservation and restoration plan.

“The roof and ceiling of church are traditional Khatamband (a ceiling made of wood work in a geometric pattern) , which had decayed due to weathering as the church remained abandoned, was being restored,” he said.

Going deep into the downtown area, the city administration has also initiated a plan for conservation of Imam bara in Hassanabad area, 11 km from Lal Chowk.

The area, known as Bagh-e-Hassan, named after Baba Hassan, a prominent saint of 16th century. In 1764, it was rebuilt by Mughal Governor Fazil Khan in an Indo-Iranian type style.

“Under the project improvement and conservation, work of Imam bara has been taken up,” he said.

Choudhary included Gurudwara Dumdama Saheb on Srinagar-Baramulla road, which was dismantled with the consent of Sikh community last year to pave the way for widening of national highway connecting to the northern most part of the country — Kupwara.

Sikhs had agreed to shift the 72-year-old gurudwara to make way for the national highway connecting Srinagar with Baramulla ending a 13-year old legal process after consultation with the Deputy Commissioner.

Established in 1947, Gurudwara Damdama Sahib had served the migrant families from Pakistan.

“The board of Smart City has approved reconstruction of Gurudwara Damdama Sahib which was demolished to pave way for the highway. A pre-fabricated gurudwara was constructed before dismantling and now a heritage building, using the material and artefacts of dismantled gurduwara is being constructed near the old location,” he said.

Centre to SC: No child to be repatriated sans following requirements of JJ Act

After getting ‘ticket’ to legislature, Urmila Matondkar joins Shiv Sena

On Statehood Day, CM expresses gratitude to creators of Nagaland