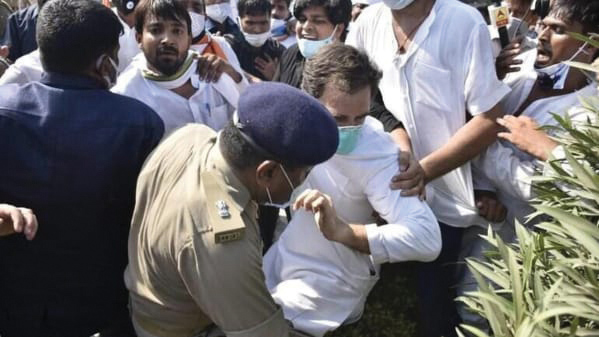 Lucknow/Noida: A senior Uttar Pradesh police officer said on Thursday the forensic report has revealed that the 19-year-old Hathras woman, who succumbed to her injuries at a Delhi hospital, was not raped.

Citing a forensic science laboratory (FSL) report, ADG (Law and Order) Prashant Kumar said the cause of her death is an injury on the neck and trauma resulting due to it.

“The report of the FSL has come. It says clearly that samples did not have sperm. It makes clear that there was no rape or gang rape,” Kumar said. “Even the woman in her statement to police did not mention about rape but talked about ‘marpeet’ (beating) only,” he said. Upset with the alleged gang-rape and murder of the Dalit woman

and her forcible cremation subsequently, a Lucknow bench of the Allahabad High Court Thursday summoned top government officials to the court.

A bench of justices Rajan Roy and Jaspreet Singh issued summons to the Uttar Pradesh additional chief secretary, director general of police and additional director general of police, asking them to be present before the court on October 12 to explain the case. Taking suo motu cognisance of the case and subsequent death of the teenager, the bench also ordered the Hathras district magistrate and senior superintendent of police to appear before it.

Meanwhile, Congress leaders Rahul Gandhi, Priyanka Gandhi Vadra and around 150 of their party workers were briefly detained in Greater Noida on Thursday for alleged violation of prohibitory orders while walking towards Hathras to meet the Dalit rape victim’s family. They were let off after they furnished personal bonds, Uttar Pradesh Police said.

Rahul Gandhi also fell down in the scuffle after police tried to stop him and his supporters from proceeding on the Yamuna Expressway near the Jewar toll plaza. Pictures of the incident were shared by the party. The Gandhis were seeking to walk down from Greater Noida to Hathras after their vehicles were stopped by the police near Pari Chowk. After walking for some time, they were stopped by the police.

The Congress had earlier claimed that the Gandhis were arrested by the police.

The family of the 19-year-old Dalit woman meanwhile Thursday alleged they were being pressurised by the district administration against “repeatedly changing” their statement.

The father of the woman, whose death has triggered a massive outrage in the country and sharp criticism for the Uttar Pradesh government, said he was being pressurised by government officials and demanded a Central Bureau of Investigation (CBI) probe into the matter.

The father, around 50, claimed that he was “pressurised” into going to a police station where the district magistrate and police officials made three members of his family sign some document.

Last week, Hathras ASP Prakash Kumar had told media persons that initially the accused were booked for attempt to murder under Section 307 of the IPC. Later, on receiving more inputs, Section 376-D (gang rape) of the IPC was added to the FIR, he had said.

22 cases of Delta Plus variant found in India