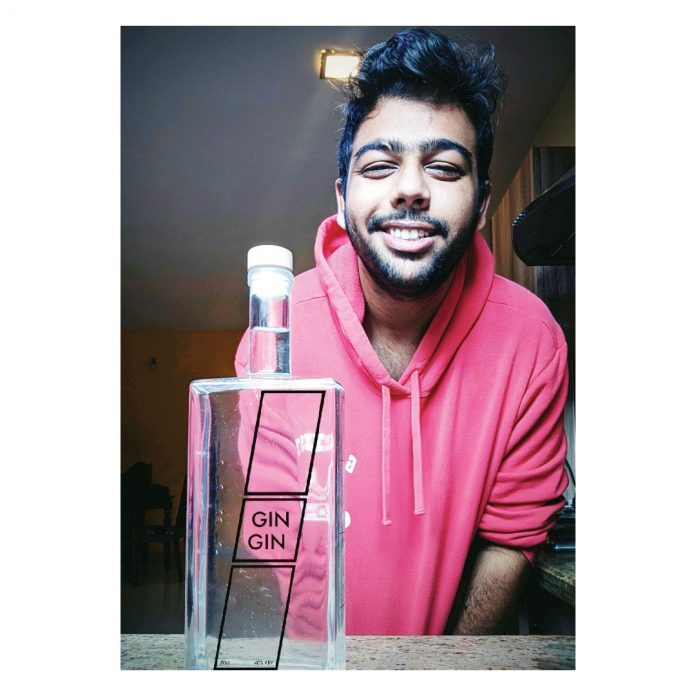 Shubham Khanna has come out with his very own craft gin consisting of nine locally procured botanicals. The bottles too have all been done in India

Shubham Khanna always had a fixation with gin and even flew to New York to learn the art of making this drink that was first introduced in India by the British during the colonial rule.

Having shifted to Goa two years ago from New Delhi to design and build swimming pools, Khanna was in search of getting something unique to the bar counter. With the popularity of gin increasing in India, he was also motivated to try and design a new gin that he could enjoy with friends who aren’t avid gin drinkers and tend to align themselves with the brown spirit side of the industry.

After much research and development, the 24-year-old is all set to launch GinGin, his very own gin.
‘#MakeinIndia’, ‘#VocalforLocal’, ‘#MadeinIndia’, and ‘GoGoa’; all these hashtags and more is what’s synonymous with GinGin, a clear cut spirit.

“This Indian gin is a single shot vapour-infused spirit which consists of nine locally procured botanicals, namely, Himalayan juniper, coriander, lavender, rosemary, caraway seeds, cinnamon, lemongrass, butterfly pea flower, and hemp,” he says. In fact, Khanna claims that GinGin is India’s first hemp craft gin. And before you raise an eyebrow, Khanna explains that marijuana and hemp are two separate varieties of the plant Cannabis Sativa. Hemp is the non-intoxicating cannabis harvested for industrial use of its products. In fact, it is used in the production of textiles, paper, bioplastics, building materials, and body care. The Tetrahydrocannabinol or THC content which is the psychoactive compound that makes one feels ‘high’ is less than 0.3 per cent if it has to be sold legally.

Khanna further states that the gin has been manufactured using the single shot distillation process – where botanicals are put into a pot with a base spirit, the mix is allowed to macerate, then the still is run with the botanicals in the spirit, from which the botanical distillate is collected. “This is then proofed with water and bottled at the desired strength,” he explains, adding that this method is rarely used these days because it is a time consuming process, but as GinGin is a small batch craft gin, he decided to use it.

The bottle too looks quite appealing and can draw you in. Minimilastic in its design, Khanna has added utility features to it as well. “Subtle demarcations are made to inform the consumer of the level of the liquid remaining so that they know exactly when to restock. This will also make life a lot easier for bartenders with their daily inventory sheets,” he says.

And with the gin culture growing in the country, Khanna is positive about his spirit. “Gin and tonic was first established in Goa, so gin anyway had to pick up sooner than later,” he says, adding that new-age Indians are moving to white spirits more and more just because of the increase in both disposable income and the rise of the cocktail culture in India.

“Also, people my age aren’t constrained by the idea of sticking to one spirit. They are more involved in the experience and more adventurous to try out new things,” he says.

Craft spirits in India too are on this rise, he says. “We have some very good Indian brands, and GinGin will be competing soon with them – some more are sure on their way too. Everyone is actually very good at whatever they all are doing, and this will sooner than later put India on the map for craft spirits,” he says, adding that GinGin is hoping to create a youthful revolution that is uber cool, and customisable.

While he was planning on launching GinGin around Easter in April, he wasn’t deterred by it having been postponed for the time being. Though the formal launch is pending, the spirit is expected to hit shelves soon once restrictions are lifted.

Go with the flow