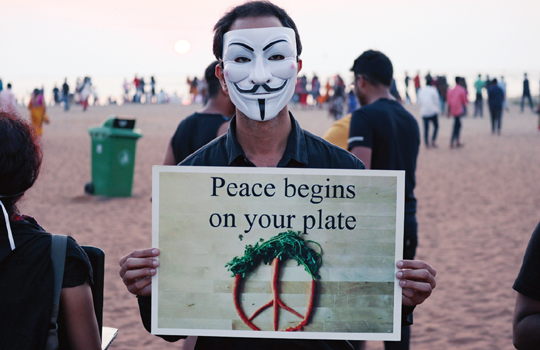 As the vegan movement gains traction in Goa, NT BUZZ learns more about this way of life that has captured the zeitgeist

Once dismissed – and often ridiculed – as just another fad diet, veganism has now entered the global mainstream. And Goa isn’t far behind.

But it is more than just a trend. Veganism, as propounded by the founder of the Vegan Society, Donald Watson in 1944, is a form of living that seeks to exclude as far as possible and practicable, all forms of exploitation of and cruelty to animals. This philosophy rejects the commodity status of animals. And its followers – known as vegans – abstain from consuming and using animal meat and related products like dairy, honey, eggs, etc.

For many, the road to adopting a vegan lifestyle is long and arduous. “I first gave up meat in 2010 when my pet dog became friends with a goat that had been tied under my building for the Bakri-Id slaughter by another family. The next day, that family sent over some mutton curry to our house and I couldn’t even look at it. It disturbed me immensely,” says Aarti Sinha, a plant-based-chef in Moira.

After a year, she reveals she did start eating meat again but the guilt remained. Then in 2014, she gave meat up for good, and in about two years she quit seafood and dairy. “Seeing documentaries about the dairy and meat industry and being active in animal rescue work in Goa helped a lot. While rescuing dogs, cats and cows, I soon realised that all animals are the same. They all want to live. And it was hypocritical of us to love one and kill another,” she adds.

In her words: “Veganism means choosing a life where I cause the least possible harm to others around me – whether it is animals or humans. It means being aware of the consequences of one’s actions and taking responsibility for it. It’s a path where one can translate good thoughts into actual good deeds, consciously.”

But the concept of veganism still provokes a lot of criticism. “Vegans are thought to be arrogant and often ‘preachy’. But if someone asks me why I don’t eat meat, I will obviously say that one shouldn’t kill another being. Being vegan is not a ‘choice’. I don’t have a choice. Killing animals is not an option. People who snub veganism are probably the most in denial of their actions,” says Sinha.

Vegans and vegetarians have also been – and still are – the target of jokes and scorn by a majority that routinely consumes animals. Condemning popular culture for its portrayal of vegans, Manjita J says: “A lot of times vegans are shown to not care about human rights. I personally think the true essence of veganism lies in its intersectionality – wherein you care about human rights and animal rights,” she says. The Mapusa-based student adds that it’s all about doing what you can. “If you can and want to go vegan, I’d say try to cut down on animal products as much as possible. It may seem daunting at first, but it gets easier. If you cannot avoid certain products, for health, affordability, or accessibility reasons, it’s alright; don’t be too hard on yourself.”

Being part of the vegan movement also means being increasingly active and vocal. And for Aditya Harmalkar ever since he chose the vegan life he began to engage in activism in the form of spreading awareness in schools and colleges on veganism and educating people about the benefits. “As an activist my goal is to educate people in the most compassionate way possible realising that I too was not born vegan and was unaware of the horrors that farmed animals had to face on a daily basis. This method helps me connect and influence people better,” says Harmalkar.

The Siolim-based entrepreneur and vegan activist first turned vegetarian in 2014 shortly after his 19th birthday. “I did it out of respect for the animals that I saw as sentient beings deserving of respect. But in 2017, I stopped consuming all animal products altogether such as honey, eggs, and dairy after learning about the cruel and exploitative ways animals were treated in these industries and went fully vegan,” he reveals adding that he went on to educate himself about the health and environmental benefits of living a vegan lifestyle. “I learned about how consuming animal products and raising animals for food is responsible for some of the world’s top killers such as diabetes, cancer, and heart disease as well as leading environmental problems such as deforestation, climate change, and global warming,” he adds.

Harmalkar shares that he was never tempted to go back as he believed he could no longer value his taste buds over the lives of animals that are killed unnecessarily. “After going vegan I started exploring many different food ideas and recipes. Taste-wise, you do not miss out on anything as a vegan and you can still enjoy the same flavours you did before you were vegan. A lot of people I know who chose the vegan life never feel like going back because they love the food that they eat and also feel so much better health-wise.”

But there’s also a lot of misinformation about how to follow – and what constitutes – a plant-based lifestyle. “A lot of people think that vegans are malnourished or weak. However, that is not true. With a well-planned plant-based diet, you can get all the essential nutrients your body needs,” says Harmalkar noting that today a lot of athletes from various fields have also started adopting a plant-based diet. It has also been proven by leading dietary organisations that a well-planned vegan diet is adequate for all stages of life including pregnancy and childhood.

Similarly, another concern that many hold is that if the whole world committed to veganism, the food produced would not be enough for everyone. However, the truth is quite the opposite, says Harmalkar. “We raise over 70 billion land animals for food every year which takes a massive toll on the earth’s resources. Over 50 per cent of the world’s crops are grown to feed these animals. If the world instead focuses on eating a plant-based diet, we will require lesser land, energy and resources and it will benefit the planet greatly.”

Meanwhile, Shawn Rodrigues equates being a vegan to one’s “moral duty”. He reveals that about 13 years ago after some observations on where and how our food is sourced, how the food we eat affects us and the environment, and after enquiring about the ethical aspects of the food we consume, he decided to choose the vegan lifestyle and he never looked back. The Vagator resident adds: “Humans are creatures of habit, we do and follow customs, traditions, diets and lifestyles blindly, in most cases it is due to convenience also because we don’t have other options or are uncomfortable to question the status quo.”

However, the vegan lifestyle is picking up in Goa. Rodrigues, who runs a vegan restaurant ‘Bean Me Up’ for the past ten years, shares that initially the restaurant catered to mostly foreigners, however in the past few years there has been an increase in the number of footfalls by urban Indians and the Goan vegan community.

But while the plant-based movement gains traction in Goa, there are still many who believe that the lifestyle is impractical for the masses. Disputing the notion that veganism is an elitist concept, lawyer and animal liberation activist, Gemini Xettigar says: “Dal, rice, roti, sabzi, and the traditional Goan vegetarian options like chanyacho ross, alsandache tonak, khatkhate, nachni sattva, etc are vegan by default. Also, vegan alternatives to meat and dairy like mock meat, plant-based milk, cheese, yoghurt, ice cream, Indian and Western sweets can all be made for a fraction of the price at home.”

And although arguments have also been made about meat-eating being an intrinsic part of certain customs, Xettigar believes that this needs to change. “Some of the worst atrocities inflicted on fellow humans have been justified in the past in the name of religion, culture, tradition, and customs. These are no justifications for unethical practices against humans and animals. If religion is not applied and practised without rational application of mind, it gets reduced to an instrument of oppression,” she says.

Recreating the magic and enigma of Parrikar