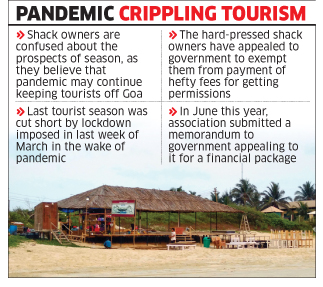 Shack owners are staring a bleak tourism season in the face this year.  The cash-strapped shack owners may not even put up their structures on beaches, as the COVID-19 pandemic continues crippling the tourism industry.

They are confused about the prospects of the season, as they believe that the pandemic may continue keeping the tourists off Goa.

The last tourist season was cut short by the lockdown imposed in the last week of March in the wake of the pandemic.

“Probably, it would be a dull season this year as well. The last tourist season was not a very good one, as we could run the business only for about three and half months,” said president of the All Goa Shack Owners Association Cruz Cardozo.

Regular foreign tourists may not come to the state this year. Footfall of domestic tourists may also come down, he said.

Shack owners usually begin spadework to put up their shacks by the middle or the end of September. They pay fees to the tourism department, and start setting up structures on the beach once permission is given.

Nods from the excise department and the Goa State Pollution Control Board are also sought.

The hard-pressed shack owners have appealed to the government to exempt them from payment of hefty fees for getting the permissions.

The industry has been in the doldrums, and the shack owners are hopeful of some sort of financial relief.

Several shack owners are also unsure of putting up shacks this year.

“Some shack owners may not even put up shacks this year. In addition to the fees, they will have to spend money on putting up the structures and hiring workers,” Cardozo explained.

He said that they will have to see what guidelines the government will come out with for workers, who come from outside the state, as well as for tourists.

“We certainly have challenging times ahead,” he reckoned.

In June this year, the association submitted a memorandum to the government appealing to it for a financial package.

The shack owners will take the issue up again later this month.