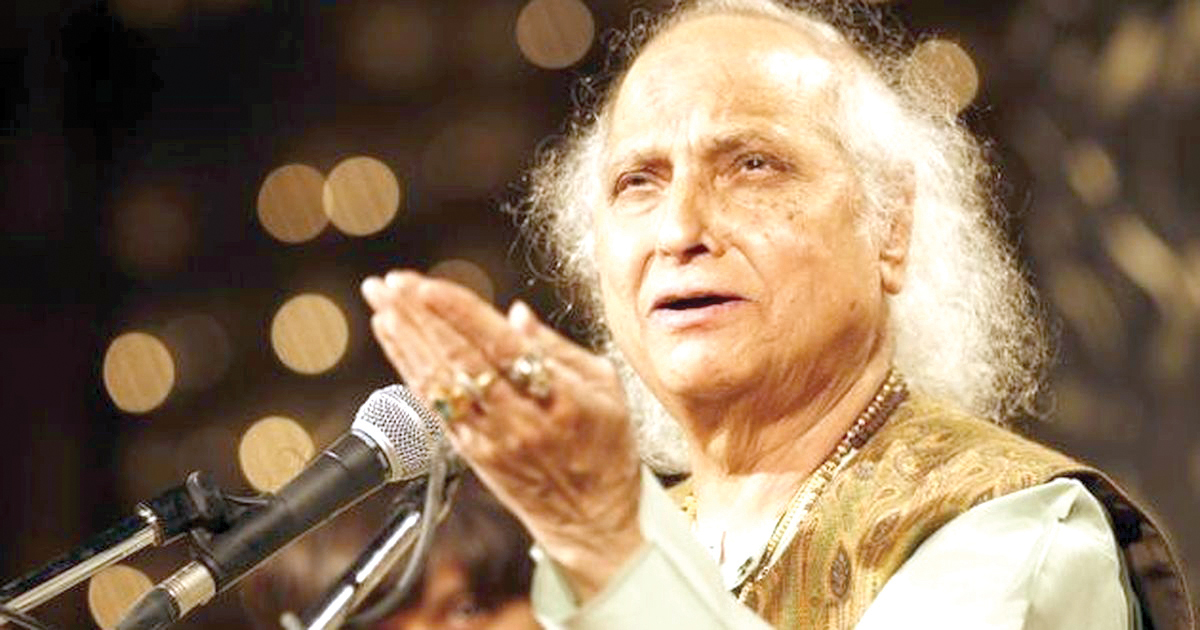 Iconic Indian classical vocalist, PANDIT JASRAJ belonging to the Mewati Gharana recently passed away at the age of 90, in the US. The legendary classical singer, during his visit to Goa in 2011 had given an interview to NT BUZZ as conducted by RAMNATH N PAI RAIKAR. We reproduce the same as a tribute to the departed classical music maestro

If tradition is an explanation for acting without thinking, then
Pt Jasraj is miles away from traditions. The doyen of Mewati Gharana, a Khayal-based Indian classical music family-hood founded in the late 19th century, without mincing words observed that 21st century should not be blamed for marketing music, as music was commercialised in every age.

“It is a universal fact that without commercialisation no one gets a meal, and what is true for music is true for everything else,” Panditji added, maintaining that the absence of recording companies and satellite television channels in earlier centuries should not make one assume that music was free from money, in the past.

Pt Jasraj also shattered the age-old perception that the Guru is supreme and always right. “The behaviour of a Guru can also be faulty, as Guru is a human being after all,” the celebrated vocalist stated, opining that in such a time, the disciple has to use his sense of judgement and take only what is good from the Guru. “The disciple, if he is studying music, has to study music from his teacher, and there is no option,” he said, “but just as the disciple has various responsibilities, the Guru should not forget that he too has different
responsibilities.”

Interacting further, the foremost exponent of the Mewati Gharana said that various forms of music such as Ghazal, Qawwali and even film music have gone a long way in popularising music among the general public. “And I would go to the extent of saying that even the music-related reality shows on television channels are contributing towards popularising music,” he observed.

“A person learning music should be compulsorily committed towards it, as without commitment and dedication he becomes a vagabond and drifts away aimlessly,” Panditji said, pointing out, “And although a good voice is a gift from God, finding a good Guru depends on the good deeds of the person.” He also observed that even though many of his disciples such as Anuradha Paudwal and Sadhana Sargam have moved on from the classical music to film music, he is proud of their achievement.

Reacting to the general perception of the connoisseurs of music that by moving out of the traditions of Mewati Gharana, he has created his own unique style in singing, Panditji mentioned that ‘own unique style’ of a performer in music, is a myth. “Everything in a vocalist comprises of the knowledge he has received from the Guru, and then some outstanding students have their own ‘Pratibha’ or inherent talent,” he remarked, observing that the knowledge from Guru is like a foundation of a house, while inputs from the disciple can be compared to interior decoration of the house, which can never be more important than the foundation.

“Music is a very strong entity, so much so that it can make a person go crazy, and also interestingly do the reverse,” the celebrated vocalist stated, recalling his emotional tryst with the magic of music. “Sometime in the 1960s, I was in the Nagaur district of Rajasthan. After having my lunch, I was resting inside the house on a bed, while my colleagues were busy playing cards,” Panditji recalled, “And then I fell asleep. As a transistor radio placed besides me started playing Lataji’s bhajan, ‘Prabhu Tero Naam Jo Dhyaye Phal Paye’ from the film ‘Hum Dono’, I woke up with tears streaming down my cheeks. This is the power of music,” he
said.

Panditji shared another interesting anecdote for the readers. “On October 20, 1960, the day I participated in my first Radio Music Festival, I had gone to visit the legendary vocalist of Patiala Gharana, Bade Ghulam Ali Khan in hospital. He was partially paralysed and was lying on one side. I sat near him and started pressing his feet,” Panditji remembered, “And then he turned towards me and asked me to become his disciple, and further said that he would train me just like his son, Munawar.”

“This was completely unexpected as it was considered an honour to be his disciple. I was stunned,” said the senior most living member of the Mewati Gharana, pointing out that he subsequently refused the tutelage offer. “I told Chachajan, as I addressed him, that I want to bring alive the music of my father, whose voice I had never heard, and remembered him only as a photograph in a photo frame,” he added. Panditji was subsequently trained in music by his elder brother Pt Maniram, and not only did he keep alive his father’s music but also started Pt Motiram Sangeet Samaroh in Hyderabad in 1972, in memory of his father.

Pt Motiram, father of Pt Jasraj, died in 1934 on the very day he was to be appointed as the state musician in the court of Mir Osman Ali Khan, the last Nizam of the Princely State of Hyderabad. Pt Jasraj was only four years old then.

When asked about sharing his memories of the past eight decades, Panditji said that many people have been coaxing him into writing an autobiography. “Now, if nothing else, then at least this persuasion will make me write my memoirs,” he stated, mentioning that the work could start in a year or two.

On a parting note, the celebrated vocalist said that youth desiring to learn music, should place their parents above God just like Shravan Kumar and Pundalik, and then seek guidance from their Guru. “Their respect for parents would ensure their success in the field,” he
concluded.

Strike out that Stroke