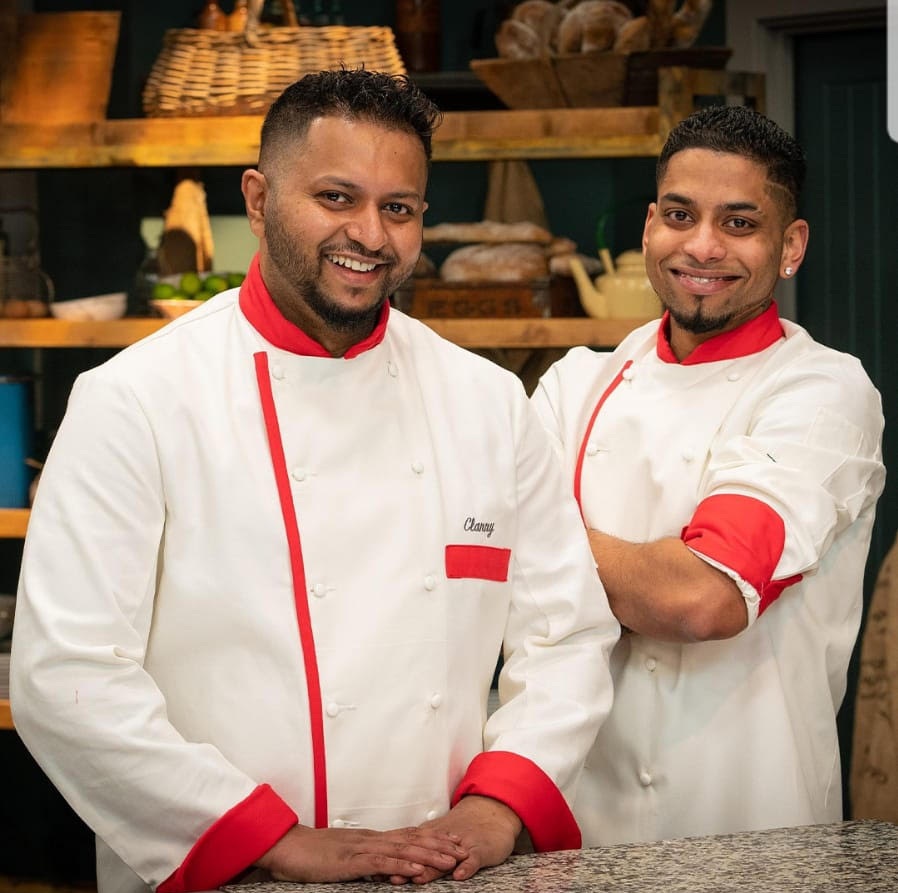 Clanny Rodrigues and Ryan Pinheiro recently did Goa proud as they made it to the finals of Bake Off: The Professionals 2020, a British television baking competition. NT BUZZ details

It wasn’t just fans of the television show, but Goans around the world who watched with bated breath as Goan duo Clanny Rodrigues and Ryan Pinheiro aced round after round to make it to the finals of the fifth series of Bake Off: The Professionals recently.

And the duo ensured that they gave their country, and especially Goa, much to be proud of as they infused their stunning creations with Indian and Goan culture in every round.

Hailing from Loutolim (Pinheiro) and Ponda (Rodrigues), the duo represented The Ivy, a restaurant in central London. While Pinheiro is pastry head chef of The Ivy’s main restaurant, Rodrigues heads the members’ Ivy Club section. And in their tenure there so far they have made desserts for The Queen, JK Rowling, and Prince William.

Bake Off: The Professionals however was their first reality show experience. “Clanny got a mail asking if he would be interested in joining Bake Off: The Professionals. It had to be a two-person team and as I was his colleague, he decided to ask me to make the dream team,” says Pinheiro. The duo then went through an audition and were among the 12 teams selected to move forward into the competition.

The duo went through 10 rounds, competing against excellent professional chefs from around the UK in the contest judged by chef patissier at Raymond Blanc’s Le Manoir aux Quat’Saisons, Benoit Blin, along with multi-award winning executive pastry chef from Singapore now settled in London, Cherish Finden.

Alongside this, they also had to balance their usual work priorities. “In fact, we were working even during the weeks that we were shooting for the show. But The Ivy was very understanding and encouraging. We just took each challenge as it came, preparing and working hard to ace each challenge,” says Pinheiro. And right through, the duo worked to serve up a slice of their homeland in each of their works. “We reinvented every recipe. Our aim was to introduce Indian/Goan ingredients twisted in the western desserts to the world,” says Pinheiro.

Some of their memorable creations included a Goan feni cocktail, a chocolate chessboard, etc.

Their most popular and entertaining round was the semi-final round on live plating using magic as the theme. It saw Rodrigues dressing up as a magician while Pinheiro was the genie who sprang up and surprised the judges only after Rodrigues rubbed the magic lamp that was part of their creation. “It was loved by everyone including the judges,” says Pinheiro, with a smile. The desserts they served up in this round included falooda with a citrus smoke bubble, mango compote, pineapple compote, coconut mousse in passion fruit shell, coconut crumble, mango dust rangoli, coconut meringue shards, mango and cardamom cremeux, pistachio kulfi pebbles, and mango coulis.

To make things even more interesting, the duo also chose to sport different hairstyles for each round. “I like experimenting with hairstyles. So we decided that Clanny would also do the same as me for the first round. We got good comments and feedback for the matching hairstyles, so we continued matching our hairstyles,” says Pinheiro. And indeed, the duo sported different designs like beating hearts and stars.

The final round consisted of two parts. In the first challenge themed around fashion, the contestants had to create a modelling chocolate hat which would then be paraded by a live model. In keeping with their cultural roots, Rodrigues and Pinheiro chose to create a Goan beach hat. “We made a hat that involved weaving which is not simple at all to do,” says Pinheiro. Apart from this they also made cutting chai bonbon with nankatai and handmade ginger chocolate earrings.

The last and final challenge saw the duo work on creating a historical banquet experience, serving 80 people that had to be ‘not just a feast for the palette but also feast for the eyes’.

Choosing to theme it as the 1947 Independence banquet, the duo selected to make a chocolate and sugar peacock (the national bird of India) sitting above a nest of kaju barfi. Alongside this were  gulab jamuns on top of deep-fried jalebis and bebinca pyramids atop batika (semolina and coconut cake). “For the finals we had to make three desserts, but we made five desserts so we increased the difficulty level,” says Pinheiro who made the bebinca by following his mother’s recipe. “Today, I do it for her,” Pinheiro was seen saying while working on making the bebinca
during the competition.

“The only constraint during the contest was time as there is no scope for mistakes and when cooking is concerned mistakes happen. So, a lot of time goes into re-doing some of the items,” says Pinheiro.

While the competition was won by the French duo of Laurian Veaudor and Thibault Courtoisier, of Cardiff’s Cocorico Patisserie, Pinheiro and Rodrigues won the hearts of the judges with their cultural journey. “Our most memorable feedback was during the finals when both the judges praised us and Cherish complimented us for bringing our culture from the start of the competition right up to the final,” says Pinheiro.

Turning back to an ancient science

The voice lives on