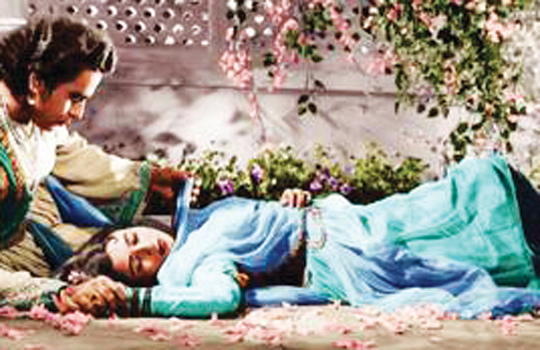 Some films are born great, some achieve greatness, and some have greatness thrust upon them. ‘Mughal-e-Azam’ was destined to be great right from its conception, though its maker K Asif had to struggle to make it
a reality.

As early as November 1945, producer Shiraz Ali Hakim, the owner of Famous Cine Studio announced ‘Mughal-e-Azam’ with Veena, Chandramohan, Sapru, Nargis and Durga Khote. It was based on Urdu dramatist, Imtiaz Ali Taj’s play, ‘Anarkali’ (1922). A silent film version of the story had already been made in 1928, and a talkie in 1935.

The filming of ‘Mughal-e-Azam’ began in 1946, but had to be stalled soon due to the volatile political situation in the country, followed by the Partition and migration of Hakim to the newly formed Pakistan. To make matters worse actor Chandramohan passed away in 1949. This left director of the film, K Asif in a helpless condition. It is said that before leaving for Pakistan, Hakim convinced a builder, Shapoorji Pallonji Mistry, whose firm had constructed the Famous Cine Studio, to invest in the film. Shapoorji was a huge admirer of Emperor Akbar and agreed to finance the film.

The entire cast of the film changed in the new set up, except Durga Khote. Prithviraj Kapoor, at the height of his fame as a movie star, was so sold on Asif’s vision that he agreed to put on weight for the role, and acted in hardly one or two other film between 1952 and 1960. Asif had initially rejected Dilip Kumar for the part of Prince Salim. The actor too was reluctant to perform in a period film, but accepted the role upon the insistence of the film’s producer. The part of Anarkali had first been offered to Suraiya but later went to Madhubala, who suffered from congenital heart disease. She however was determined to finish the film.

K Asif recruited Amanullah Khan, Kamal Amrohi, Wajahat Mirza and Ehsan Rizvi, the leading Urdu writers of the time to write for his film. Naushad, Shakeel Badayuni and R D Mathur, the top talent of the film industry in music, lyrics and photography were also roped in. When the film was in the making, ‘Anarkali’ starring Pradeep Kumar and Bina Rai was produced and released by Filmistan, a rival company, in 1953. Even though it was a big musical hit, undeterred Asif carried on his work.

In 1953, another film, ‘Jhansi ki Rani’, a big budget film made by Sohrab Modi for his Minerva Movietone banner was released. It was made in glorious Technicolor. Now, Asif wanted to remake his film in colour, but when the distributors lost their patience, he settled for having two songs and the film’s 30-minute climax shot in Technicolor, with the remaining 85 per cent of the film shot in black and white. Asif saw to it that the film got the best of everything. Tailors from Delhi stitched the costumes, Hyderabad goldsmiths made the jewellery, craftsmen from Kolhapur worked on the crowns, Rajasthani ironsmiths fabricated the weapons, exquisite embroidery on the costumes came from Khambayat in Gujarat, and elaborate footwear arrived from Agra. Thousands of camels, horses, elephants and soldiers – most on loan from the Indian Army – were employed for the battle scenes shot in Rajasthan.

Naushad composed 20 songs for the film, besides a special evocative background score, however only 12 songs remained in the final version. Two of these songs were sung by the legendary classical vocalist, Bade Ghulam Ali Khan, for on-screen Tansen. Khan sahib having no intention to sing for a film asked for an astronomical amount of `25,000 per song, in the 1950s, to put Asif off. Asif agreed without batting an eyelid. The director also got the great Indian classical dancer, Lachhu Maharaj to create dances in the film.

Produced at an exorbitant cost of `1.5 crore, ‘Mughal-e-Azam’ was released on August 5, 1960, exactly 15 years after it was first announced. Released in 150 cinemas across the country, it established a record for the widest release of a Hindi film. The day before bookings for the film opened, a reported crowd of 1,00,000 gathered outside the Maratha Mandir to buy tickets. The specially printed tickets had coloured photos of the characters in the film. It became the highest-grossing Hindi film of all time surpassing ‘Mother India’ (1957) and during its 25-week run grossed nearly `5.5 crore, until ‘Sholay’ (1975) surpassed its net revenue.

In November 2004, the entire movie was restored and colorised, with Dolby Digital sound in a year-long process by the Indian Academy of Arts and Animation, and re-released. The premiere of this version was held at the Eros Cinema in Mumbai, with Dilip Kumar, who had not attended the original premiere, in attendance.

Interestingly, Prime Minister of Pakistan, Zulfiqar Ali Bhutto, who during his youth lived both in India and Pakistan, until late 1950s, resided in a sprawling mansion at Bandra. In the 1950s, Bhutto used to visit the sets of ‘Mughal-e-Azam’ at Mohan Studio, in Mumbai just to see Madhubala, especially when the song ‘Mohe Panghat pe Nandlal Ched Gayo re’ was being picturised. Bhutto was completely mesmerised by the song composition and the picturisation. Music director, Naushad, who was also present at the time of this picturisation was complimented by Bhutto for composing such a melodious song based on Raga Pilu.

Interestingly, in 2006, ‘Mughal-e-Azam’ became only the fourth Indian film certified for showing in Pakistan since that country’s 1965 ban on Indian cinema, and was released with a premiere show in Lahore.

Keeping an eye on eye-care