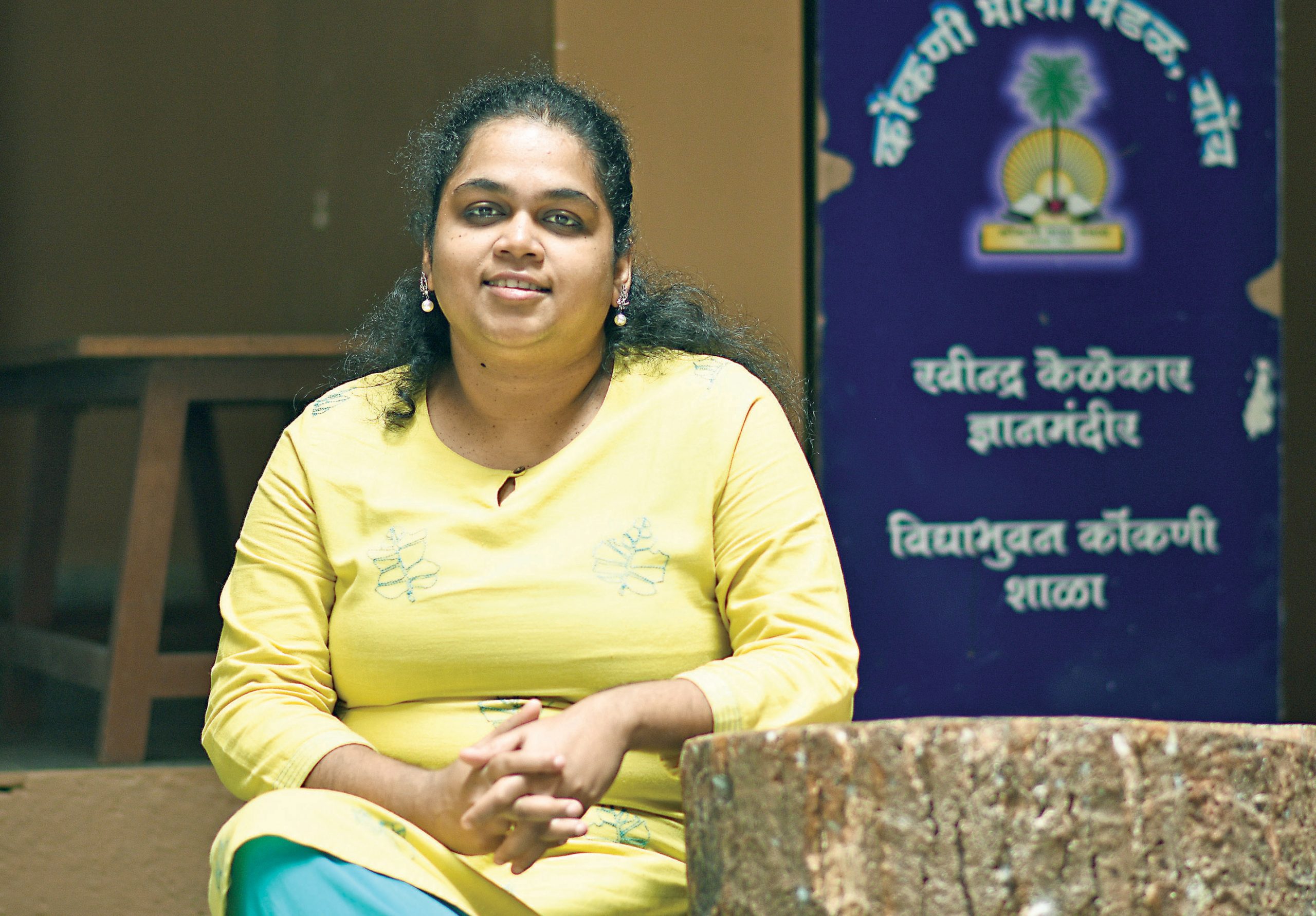 Whether one speaks Konkani that’s Antruzi, Bardezi, Sashti, or of Pedne, Sattari, Kunabi, Chitpavani, etc, the language of Goa has continues to attract debate, and is still a language that is slowly emerging as a medium for authors, both young and old to write in.The first woman president of Konkani Bhasha Mandal, Anwesha Singbal takes NT NETWORK through their plans and initiatives

From pursuing law, working as a journalist, translator, and being part of several initiatives- education being her favourite, Sahitya Akademi winner Anwesha Singbal has now been elected as the president of Konkani Bhasha Mandal, an organisation founded to permeate the use and legacy of Konkani – our mother tongue.

Excerpts from an interview

Q. You are the first woman president of KBM.

A lot has been written about me being the first woman president of Konkani Bhasha Mandal. I am the president not because of my gender but my capabilities and the trust that others have bestowed on me as a young crusader of Konkani. I would be happy to serve the organisation and Konkani as a whole. Having said that, this has always been a key work for KBM because of which we have been always able to do immense work and the team shall continue to do so. I may only be the face but there is a huge dedicated young force that will always stand strong for our language.

Q. What are your plans for the coming term?

We have a list of almost 60 items. But more than 32 can be done online. And the activities have already begun. Focused work is being undertaken to create online content in Konkani. Educational blogs have been created to aid the Konkani teachers from primary to higher secondary level. All Konkani lessons are converted into visual form like videos and circulated across Goa for the use of students. Workshops are being planned in creative literature, children’s literature, grammar, Konkani typing, translation etc. Major activities of KBM such as Shenoi Goembab Kathamal may also see a digitalised version and is in the planning phase

Q. Have subsequent governments only made matters worse in declaring Konkani as the official language of Goa?

The journey up to the declaring of official language was of course tougher. It was finally declared the official language of Goa on February 4, 1987. And while the Official Language Act came into being, for several years it was never really implemented. The Official Language Act was finally set to motion in 2009 during the Digambar Kamat government. A subcommittee was formed under advocate Uday Bhembre’s chairmanship which submitted a detail report. It comprised of preparation of terminologies in the official language and training to be imparted to the employees of the government in matter of use of official language. The work was started in six different terminologies out of which only the administrative terminology was complete and published in 2014. The training for government servants was started during the Manohar Parrikar government however that too has ceased today. Few notifications with regards to the implementation have seen the light of the day. A lot of work was done when Prakash Vazhrikar took charge as the director of official language. However the work has again lost its speed now.

Q. Through your experience how do you see youngsters wanting to preserve Konkani, and what efforts should be taken in the right direction?

Konkani is widely spoken and written by the youngsters. Youngsters know newer mediums and have started to create content using these. Several videos, blogs are constantly created in Konkani. Social media too is efficiently used. So the mediums may have changed but youth continue to embrace Konkani.

Q. Tell us about the school and textbooks the NGO creates and how it’s different from the other schools?

KBM has produced six albums of children’s songs and two albums of patriotic anthems in Konkani, as a huge void existed in these areas. It has also developed three books and three audio CDs of nursery rhymes in Konkani titled as ‘Mankulyanchi Kavana’. Over 150 nursery rhymes have been compiled in these books and CDs. KBM has also published books required for educational and research purposes as also several anthologies. The publications include three versions of Konkani Grammar. The organisation has also built good relations with organisations across India, working for children’s literature. It has been working closely with national level organisations like NCERT, Eklavya Books (Bhopal), Ektara Foundation (Bhopal), Jyotsana Prakashan (Pune), Pratham Books (New Delhi) and others. Besides this, KBM has managed to translate over 100 children’s works and literary works in other languages to Konkani besides publishing several original story titles in Konkani. Poetry posters and cards as well as educational charts have been published too. Educational books include several Konkani-English and Konkani-Konkani primer, biographies, books of one act plays, books on thoughts, freedom fighters of Goa etc.

Q. With online education the way forward, will KBM use this method to create content, etc?

KBM has already started its work. The pandemic has meant that schools have remained shut and institutions have been left to turn to online modes to reach students. But while content related to many subjects is already available online, Konkani has no material from the syllabus available online. We’ve taken the initiative to prepare and make the language subject’s content available online for the benefit of teachers and students. KBM has formed a group of Konkani teachers and those associated with technology, who are together preparing this content from the syllabus. Different educational blogs have been created and is regularly uploaded.

Q. When it comes to the script how will KBM handle the issue?

It’s a myth that the two sections are not united. People with selfish interests may not be united or often fall apart but those who love the language and want to see its progress would always work together. KBM has always done so and will continue to.

Q. Tell us about your love for the mother tongue and how it has reflected in your personality, work, career etc.

Coming from a very protected childhood, my parents have always tried giving me the best and keeping me away from hardships as far as possible. My father has been part of the Konkani language movement and a passionate writer whom I have always seen as my hero. I have heard stories from him and my grandmother too from childhood. This has instilled pride about Konkani, sowing the seeds of writing in me. I lost my father in my prime youth and that was a turning point in life. I emerged out of my shell and all of a sudden saw myself paving my own path. I studied law with an aim to work under my father who was a very respected lawyer in Ponda. The last two years of my college saw me getting into different fields one of which was journalism. I started writing as campus reporter for Sunaparant, a Konkani daily. I got into agitations one of which was the computer agitation led by the all Goa student’s forum, then the Goa Bachao Abhiyan’s agitation against the Regional Plan, etc. And here began my zeal to do something for society. I realised I am not meant for treading the common path. And thus the hunt for the self began. What drives me is this understanding of myself-that not many want to take the difficult path and it is not really difficult. It is about challenging your own self to be different. I believe all of us do have this within. Some ignore it and others like me run after it.

Q. Are you ready to face gender politics?

I really haven’t allowed it to affect me. To the wonderful women out there: ‘Live your dreams and run after them’. The world cannot change till the time you yourself feel it will. You will have to make several sacrifices to do that but unless we start we will not be able to create a better environment for the generations to come. If Savitribai Phule didn’t face criticism and stones, none of us would have ever been able to get educated. But only doing a job and earning shouldn’t be our goal. We have a huge role in establishing a balance in this society, to emancipate our minds from prejudices and typical stereotypes, to break the shackles that have bonded us for ages.

Where have all the picnics gone?