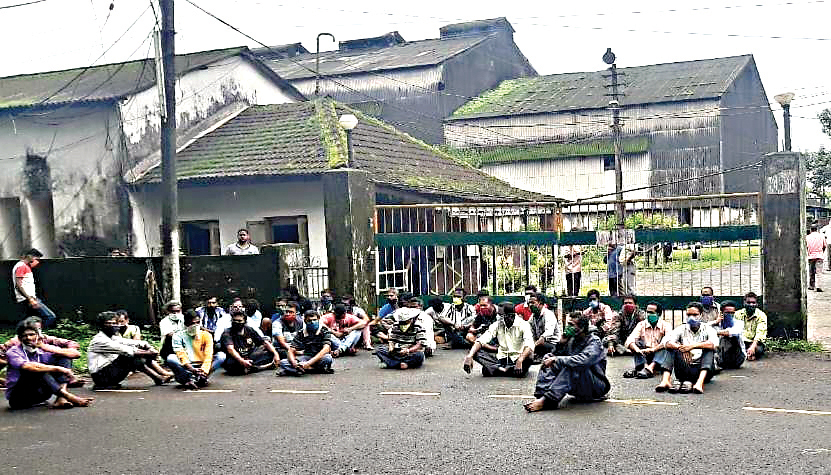 Contractual workers of Sanjivani sugar factory staged protest outside the factory premises on Saturday demanding renewal of their work contract, which expired on July 31.

Following the protest, the PWD Minister Deepak Pauskar met the workers, and assured them to extend their contract by 2 months from Monday.

As per the available information, the annual contract of sugar factory workers ended on July 31.

The contract was extended by the factory administrator by 2 months in the month of May.

With no hope of factory resuming operations this season, workers feared that the government may not renew their contract, and they may have to face unemployment, and, so, they staged protest to press for the demand of contract renewal.

Around 50 contractual workers gathered outside the factory’s main gate at Dharbanbdora on Saturday morning, and staged a protest under the leadership of Puti Gaonkar.

During their meeting, the workers urged the minister to absorb them in other departments or give any other work, if the government is not willing to extend their contract.

“We are ready for any work,” the workers told the Minister during the meeting. After half an hour-long discussion, the Minister assured the workers to extend their contract by two months from August 3. Following that the workers called off their protest in the afternoon but  threatened to protest outside the Co-operation Minister Govind Gaude’s residence in Bandora on Tuesday if their contract is not extended from Monday.

It should be noted that on Wednesday,  sugarcane farmers had staged a hunger strike outside the Sanjivani  factory demanding payment of the pending dues. Following which on Friday the state government released Rs 5.23 crore pending dues in the form of support price, under Shetkari Aadhar Nidhi.

Govt to identify and notify 70 wetlands by March 2021